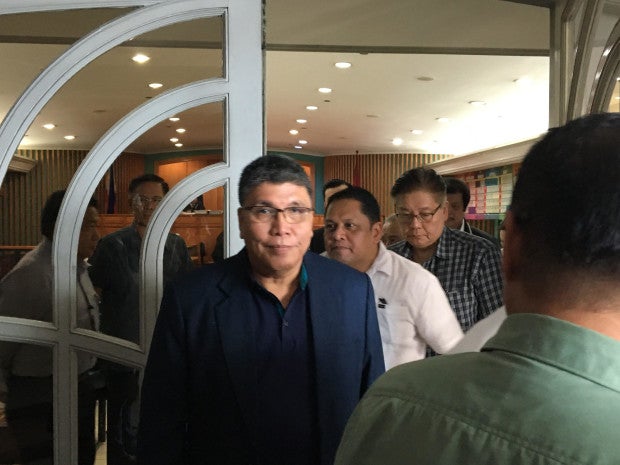 Surigao del Sur Rep. Prospero Pichay Jr. steps out of the Sandiganbayan on Jan. 17, 2017, after his arraignment for graft was postponed to March. Pichay is being tried for a deal to use funds of the Local Water Utilities Administration in the purchase of a majority stake in the insolvent, Express Savings Bank Inc. (PHOTO BY VINCE NONATO / INQUIRER)

MANILA — The arraignment of Surigao del Sur 1st Dist. Rep. Prospero Pichay, Jr., and Valenzuela City 1st Dist. Rep. Weslie Gatchalian were postponed to March pending their appeals on the Sandiganbayan’s finding of probable cause to try them for graft.

During a scheduled hearing on Tuesday, Fourth Division chairperson Justice Alex L. Quiroz said “the court will have to resolve [the pending appeals] before we proceed with the arraignment.”

The public officials and individuals who still face charges have filed their motion for reconsideration to seek the dismissal of their case, while prosecutors would still have to file their opposition to the such appeals.

The case arose from Local Water Utilities Administration’s alleged misuse of P780 million for the purchase of a 60% majority stake in the insolvent Laguna-based Express Savings Bank Inc. (ESBI), which is jointly owned by Forum Pacific, Inc. (FPI), and the Gatchalian family’s WELLEX Group, Inc. (WGI). At the time of the transaction, Pichay headed the LWUA.

In an Oct. 18 resolution, the Fourth Division sustained the finding of probable cause for the charges of graft and violation of Section X126.2(c)(2) of the Manual of Regulation for Banks. It found that the matters were “clearly evidentiary in nature and would be best threshed out in a trial.”

However, it dismissed the malversation charges because prosecutors failed to implead an “accountable officer” to be held liable for the alleged misuse of funds.

It also junked the charges of violation of Section 19 of the General Banking Act, saying that LWUA officials have been allowed to sit as ESBI officers because it was in effect a subsidiary of a government corporation and no longer a private bank. 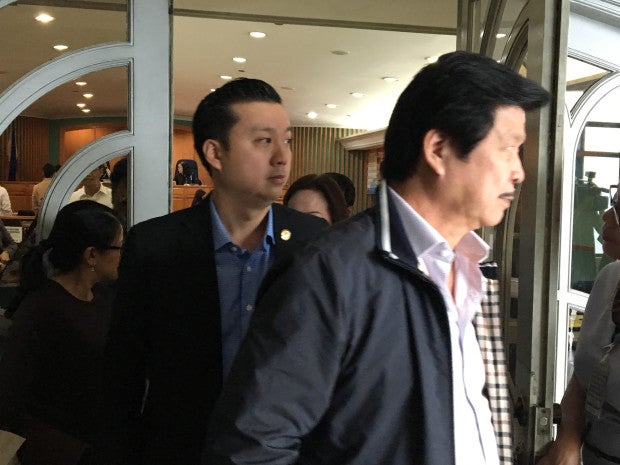 Valenzuela Rep. Weslie Gatchalian leaves the Sandiganbayan on Jan. 17, 2017, after his arraignment for graft was postponed until March. Gatchalian is being tried for the use of Local Water Utilities Administration funds in the purchase of the majority stake in the insolvent Express Savings Bank Inc. (PHOTO BY VINCE NONATO / INQUIRER)

Pichay, Feleo and Montilla also still face trial for violation of Section X126.2(c)(2) of the Manual of Regulation for Banks.

The accused individuals were originally supposed to be arraigned on Aug. 15, but the court had to postpone it to resolve the motions for judicial determination of probable cause questioning the Office of the Ombudsman’s indictment.

Another set on Oct. 5 was cancelled before the issue was resolved. But, with both sides only “partially happy” about the Oct. 18resolution, the scheduled hearings on Oct. 20 and then Nov. 17 were postponed to give way to the appeals.  SFM