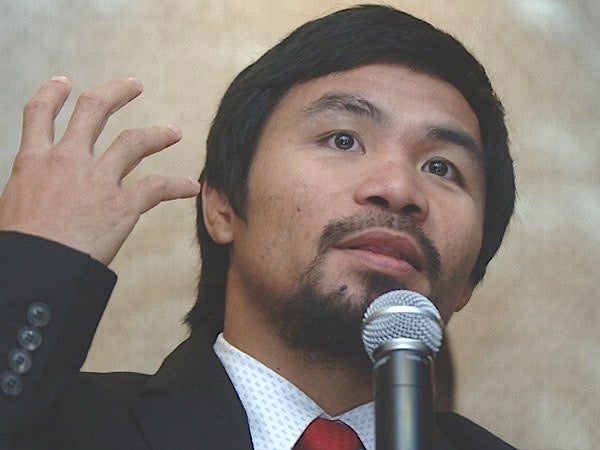 Senator Manny Pacquiao on Tuesday used the Bible to defend the proposed revival of the capital punishment, saying that even Jesus Christ was sentenced to death.

Pacquiao said it was clear in the Bible, which he said he reads everyday, that “death penalty is allowed.”

“The Bible says do not kill. Ang ibig sabihin kasi noon pag nagkasala ka sa akin hindi kita pwedeg patayin (In the past it means that if you sinned against me I cannot kill you). Let the authority handle that. We’re not talking about individually, but we’re talking the law of the land, which is approved by God and instituted by God. The government is instituted by God,” he told reporters.

“Even Jesus Christ nga na-sentensyahan ng kamatayan dahil ang government nag-i-impose talaga ng (Even Jesus Christ was sentenced to death because the government has imposed) death penalty but we’re not talking about individually. The Bible says: ‘Thou shall not kill.’ Meaning, kung nagkasala ka sa akin, hind ko pwedeng ilagay ang batas sa kamay ko, patayin kita (Meaning, if you sinned against me I cannot put the law in my hands, or I cannot kill you),” he stressed.

Pacquiao said he already tried to convince his colleagues in the Senate by explaining to them that they should decide on the proposed revival of the death penalty based on the best interests of the people, and not based on their conscience or personal feelings about the issue.

“I already explained that to them properly hindi tayo pwedeng mag-decision sa sarili because ito ang nararamdanan natin (that we cannot render a decision for ourselves based on our feelings). Ano bang basis sa pag oppose nyo ng (What’s your basis in opposing) death penalty? Because of your religious beliefs or because of the Constitution?”

(I’m sure the Constitution allowed that heinous crimes can be dealt with the death penalty.)

Despite opposition by some sectors, Pacquiao remained confident that the proposed restoration of the death penalty would be passed in the Senate.

He also expressed readiness to lead a subcommittee in the chamber to tackle the proposal./ac/rga