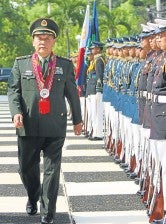 MANILA, Philippines—Manila and Beijing on Monday agreed to hold dialogues on the disputed Spratly Islands in the South China Sea following a meeting between President Benigno Aquino III and Chinese Defense Minister Liang Guanglie that Malacañang said could result in “fewer incidents.”

Briefing reporters on the 70-minute meeting at the Palace, Communications Secretary Ricky Carandang said, “Both sides are eager to not let the irritants that have come in the last several months become a thorn to the bilateral relations between the two countries.”

Carandang was referring to the incident in March when two Chinese vessels harassed a Philippine exploration ship in the Reed Bank, an area in the South China Sea claimed by Manila, that prompted Manila to send planes and ships in the area.

Carandang described the meeting between the President and Liang as “cordial,” “conciliatory” and “fruitful.” He said the discussions focused on general issues and had nothing on specific incidents.

A proposed code of conduct in the South China Sea was also brought up, he said.

“With this meeting, both sides have affirmed their commitment to peaceful dialog with regard to issues we may not always agree on. To the extent that we expect as a result of this dialog that there would be fewer incidents between our two countries,” Carandang said.

Earlier on Monday, Defense Secretary Voltaire Gazmin and Liang vowed to avoid “unilateral actions that would cause alarm” and focus on a “peaceful resolution” of the dispute over the Spratly Islands.

During an hourlong meeting at the Department of National Defense, Gazmin likewise did not take up with his visitor China’s latest intrusion in March, when two Chinese Navy gunboats shadowed a Philippine government research vessel in the Reed Bank.

Liang, however, touched on Philippine reports that two fighter jets were spotted in the vicinity of the Reed Bank on March 11, Gazmin said.

Liang said China had no MIG jets, in effect denying that the jets were Chinese.

The Philippine Air Force has not been able to identify the intruding jets but corrected previous reports that they “buzzed” PAF planes on routine patrol in the area.

In a statement, the defense department said the two officials agreed that “unilateral actions (in the South China Sea) which could cause alarm should be avoided.”

“Both ministers expressed hope that the implementing guidelines of the 2002 Declaration on the Conduct of Parties in the South China Sea would soon be finalized and agreed upon, that responsible behavior of all parties to the South China Sea issue would help keep the area stable while all parties work for the peaceful resolution of the issues.

The 2002 declaration signed by China and the 10-nation Association of Southeast Asian Nations is an undertaking to work for a definitive code of conduct among the six nations that have laid claim on the Spratlys—the Philippines, China, Vietnam, Malaysia, Taiwan and Brunei.

“Both ministers recognized that unilateral actions which could cause alarm should be avoided,” the defense department said.

Liang visited Singapore and Indonesia before coming to the Philippines. He departs for China on Wednesday.

Gazmin, who said he might visit China in June, disclosed that there was no agreement so far about bilateral military exercises since these would first be discussed on the technical working group level.

“That will be worked out. Nothing is final on that,” he said.

Gazmin described his Chinese counterpart’s five-day official visit as a “confidence-building measure” and said the atmosphere during the meeting was “friendly.”