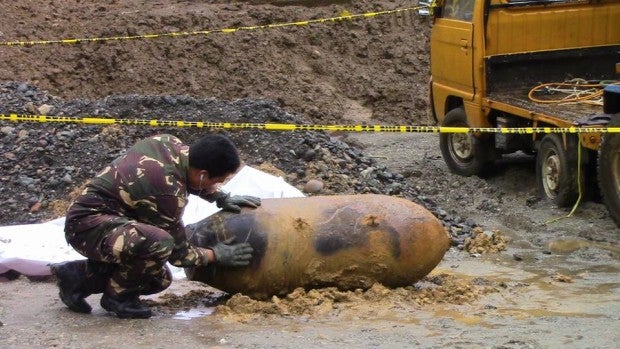 The vintage bomb, which measures 54 inches long with a diameter of 14 inches, was found buried in six meters of soil under Surigao High School, local historian Jake Miranda said in a Facebook post on Tuesday.

On Monday night, his assistance was sought by equipment contractor Ryan Orquina to validate the bomb.

It was Orquina’s workers constructing a school building who unearthed the bomb and brought it to his garage, Miranda said.

The bomb explosives personnel from the Army arrived at 6 a.m. and determined that the bomb was “live with its nose, tail booster fuses and body in pristine condition.”

It was decided that the bomb will be eventually blown up in a remote area.

Some 1,000 residents were evacuated and classes at St. Paul University in Surigao were cancelled as the bomb was transported outside the city, Miranda told INQUIRER.net in a separate interview.

The bomb is now temporarily kept at an Army camp.

“This type of bomb was used by Naval aircraft like the SBD and SB2C dive bombers and the TBM/TBF torpedo bomber. A bombing raid was conducted by such aircraft from carriers USS Essex and USS Lexington in Surigao City on September 9, 1944,” he said.

Miranda said this specific bomb was aimed at a Japanese Army garrison located on a hilltop, which is now Surigao High School.

In 2012, an unexploded Japanese torpedo, also believed to be from the battle of the Surigao Strait, was found in the nearby Dinagat Island. It now sits in a museum devoted to the historic battle in Surigao.

The Battle of the Surigao Strait was one of the naval battles between the Armerican and Japanese battleships in the Pacific campaign of World War II. JE/rga