NGCP in P50-M effort to secure facilities with locals’ support 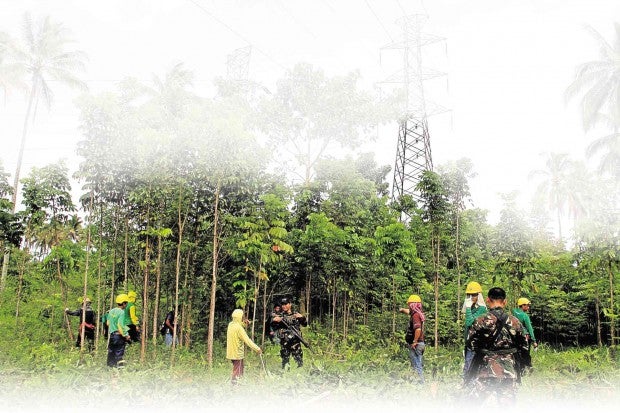 Power transmission towers in Mindanao are constantly under threat from bombers. In this 2016 photo, workers from the National Grid Corporation of the Philippines and soldiers guard one tower in Lanao del Norte. (Photo by Richel Umel, INQUIRER MINDANAO

MANILA — The operator of the country’s electricity power grid will spend at least P50 million on a five-year skills training program for unemployed and underemployed members of its stakeholder communities in an effort partly meant to protect its far-flung transmission facilities nationwide.

In a press briefing, National Grid Corporation of the Philippines president Henry Sy Jr. said that the program would address the shortage of skilled construction workers around the country, which would be crucial for the success of the Duterte administration’s P8-trillion infrastructure buildup scheme.

“We wanted to make this project a reality because we recognize the lack of skilled workers in various industries, especially in construction,” he said in a press briefing on Monday where the University of the Philippines-administered training program was launched. “The lack of knowledge and work standards jeopardize their safety, and the quality of work that they produce.”

NGCP and UP signed a memorandum of agreement for the creation of the NGCP-UP Skills Camp. The partnership includes establishing relationships with indigent residents of identified communities, conducting needs assessment analysis for livelihood programs, aside from the actual skills training. Through a separate partnership with the Philippine Employment Services Office (Peso), trainees who will complete the course will also be assisted for possible employment opportunities within their locality.

One of NGCP’s biggest recurring issues is the vulnerability of its far-flung transmission towers to bombings by bandits who extort money from the firm, or from locals who pilfer steel from the its facilities — something the firm hopes to curtail by winning the support of locals who reside nearby.

The grid operator has identified a population of 155,000 residents in 29 communities, 62,000 of which are individuals in the labor market. The company projects that it will invest about P20,000 per household to achieve an end goal of long-term increased employability and income of project beneficiaries.

The program will start with an estimated 1,000 residents from seven identified key areas near UP campuses in Los Baños, Laguna; Davao; Iloilo; and Tacloban, Leyte benefitting from the project.

Sy emphasized the corporation’s goal of contributing to the alleviation of poverty and issues on job security.

“By providing skills training as part of NGCP’s corporate initiatives, we open more doors of job opportunities to our partner communities,” he said. “The identified areas are our partners in protecting transmission facilities, and this project is a fulfillment of our vow to support their socio-economic development. With no less than UP as our partner, NGCP is confident that the success of this project will be replicated in more areas in the future.” SFM/rga