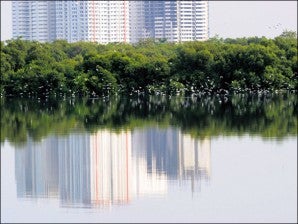 IN DANGER Birds feed at the Las Piñas-Parañaque Coastal Lagoon in Manila Bay. A reclamation project threatens to destroy the nature reserve and bird sanctuary. AFP

MANILA, Philippines—A plan to reclaim land on Manila Bay is ruffling feathers, with conservationists warning the project would destroy one of Metro Manila’s last nature reserves and bird sanctuaries.

In a sprawling metropolis of more than 12 million people that has seen decades of chaotic development, the area known as the Las Piñas-Parañaque Coastal Lagoon is vital because there are so few other bird habitats left, according to environmentalists.

“It is the last coastal frontier in Metro Manila, the last of its kind,” said Rey Aguinaldo, a US-trained biologist who manages the coastal lagoons for the Department of Environment and Natural Resources.

In 2007, then President Gloria Macapagal-Arroyo issued Executive Order No. 1412 declaring the coastal lagoon as the Las Piñas-Parañaque Critical Habitat and Ecotourism Area and banning activities that would impede its ecologically vital role as a bird sanctuary.

But now the government is planning to reclaim another 635 hectares in front of the sanctuary to create a new business center.

Opponents of the planned P14-billion project fear that although most of the coastal lagoon would initially remain intact, the bird sanctuary would be left largely cut off from Manila Bay.

“The critical habitat would be penned in, and eventually the mangroves would die because saltwater would not be able to circulate,” Aguinaldo pointed out. “The saltwater mud flats would also eventually dry up.”

A highway linking the new business center with the rest of Metro Manila would also cut through the mangroves, while about 15 percent of one island would be removed for a drainage canal, according to the project’s design.

“The road may block the tidal water flow … and thereby dry up the mangrove area and destroy most of the high-tide roosts for waterbirds,” said Michael Lu, head of the Wild Bird Club of the Philippines.

But the Philippine Reclamation Authority insists the development project, which the government agency will carry out with local authorities and a private investor, would maintain the integrity of the habitat.

“The expansion is seaward. No mangroves will be cut,” said Josephine Castro, the agency’s assistant manager for reclamation.

Castro also said the agency had revised the original project design so that no commercial development but only ecotourism activities would take place in the coastal lagoon.

In a twist to the debate, Castro pointed out that the coastal lagoon itself was surrounded by land that was reclaimed from Manila Bay in the 1970s but was never developed as originally planned.

Squatters initially colonized the area when it was left vacant, according to Castro.

But when the area began to sink in the 1980s, the squatters were relocated and the government planted mangroves on the site to stop the water from reclaiming the land that later became embroiled in the controversial Amari deal.

Regardless of the site’s origins, Lu warned that the development project would be a final blow for Manila Bay’s waterbird population.

“There are no other viable alternatives for the waterbirds anymore,” he said. “More than 95 percent of natural wetland habitats in the bay have been converted to fishponds.”

Ornithologists had counted up to 28,000 birds in Manila Bay in a single day in the 1970s, before the fishpond industry exploded and land reclamation began, according to Lu.

He said the 80-strong Manila colony of the Philippine duck would be extinguished if the project went ahead as planned.

Those 80 birds make up nearly 2 percent of the known population of the species, which is found only in the Philippines, according to Lu.

Lu also said the loss of the bird sanctuary would put further pressure on the rapidly declining global population of Chinese egrets, which spend the northern winter at the coastal lagoon.

The fate of the waterbirds in Manila Bay is a common story across Asia, where their habitat has been destroyed at an unprecedented rate in recent decades amid rampant economic development.

Environment monitor Wetlands International reported last year that while strong conservation measures had slowed the decline of waterbird populations in the west, those in Asia were shrinking quickly.

Habitat destruction was the main reason, with long-distance migrants being the most vulnerable, Wetlands International said.

Read Next
Senator suggests new poll on RH measure
EDITORS' PICK
Smart offers wireless fiber-like speeds to Filipino homes with country’s first 5G Prepaid Home WiFi
Legarda: Ending Violence Against Women, a cause for all
This new condo in the South will make you want to turn a new leaf
National COVID-19 vaccination drive gets over 5.3 million people vaxxed so far
Pandemic prognosis: Where does it go from here?
Google won’t accept election ads for 2022 national polls
MOST READ
Bongbong Marcos to face another disqualification case
Christine Bersola, Julius Babao cleared of cancer after colonoscopy, endoscopy
A Merry Bongbong
Pandemic prognosis: Where does it go from here?
Don't miss out on the latest news and information.