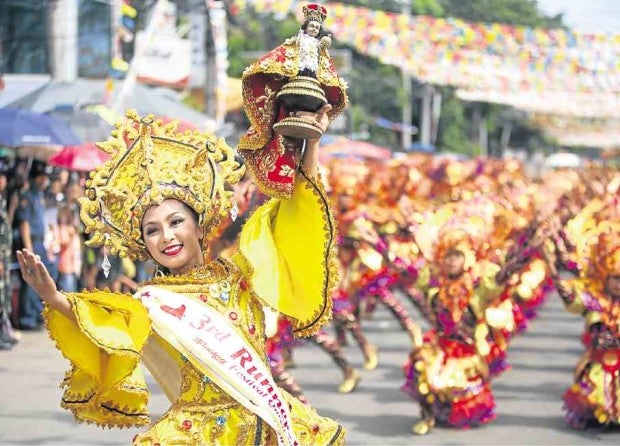 The Sinulog is all about Cebu province’s most revered religious icon, the Sto. Niño, represented by a replica being held by a participant in a dance competition in Cebu City. —LITO TECSON/CEBU DAILY NEWS

Catholic Church leaders tried to bring religious sense to two of the country’s biggest festivals—Sinulog in Cebu and Ati-Atihan in Aklan—which had taken on a character detached from the solemnity that some Church officials want the feasts to retain amid millions of people dancing and shouting in the streets supposedly in honor of Sto. Niño.

In Aklan’s capital town, Kalibo, Bishop Jose Corazon Tala-oc called on Sto. Niño devotees to strengthen their faith amid the Ati-Atihan celebration that had become world famous for its colorful costumes and noisy crowds.

Tala-oc said Catholics should be like Jesus who “emptied himself and even set aside his being God.”

“Greatness lies in humility,” the bishop said at a homily during Mass in front of the St. John the Baptist Cathedral attended by thousands of people.

The bishop also called attention to the plight of the Ati, a tribe after which the festival was named but which is being displaced from its ancestral domain in Boracay by the development of resorts in the world-famous island.

Seconds after the Mass, shouts of “Viva Senor Sto. Niño” and the boom of drums filled the streets, signaling the start of “sadsad,” the street-dancing that has made the festival famous.

The street dancing, part of a procession in the town’s main streets, was expected to last until 8 p.m. last night. The event turns Kalibo into one big party venue.

The number of revelers was estimated to reach 80,000 to 100,000 by noon on Sunday, according to SPO1 Nida Gregas, public information officer of the Aklan provincial police office.

Police and security personnel confiscated backpacks and bags that could conceal bottled drinks as part of security measures.

At least 70,000 revelers and devotees braved the rain and joined the street dancing on Saturday where 30 Ati tribes performed in the streets.

In Cebu City, the crowd estimate on Sunday’s Sinulog grand parade was smaller as a result of tight security measures against terror threats.

But it also meant fewer headaches for the police as the crowd was less rowdy compared to last year when a stampede injured several revelers.

Chief Supt. Noli Taliño, head of the Central Visayas police, cited consolidated reports and said the crowd peaked at 1.5 million, about half of the three million that attended last year’s celebration. 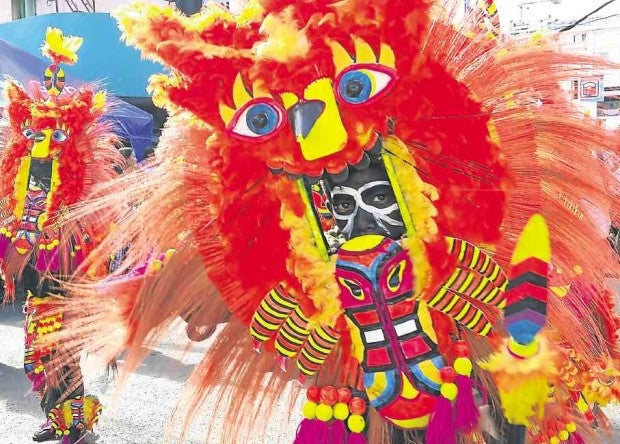 In the Aklan capital, Kalibo, the streets burst with colors as Ati-Atihan participants wear all sorts of costumes. —NESTOR P. BURGOS JR.

Except for a woman who was injured when a transformer exploded on Osmena Boulevard, “the celebration remained peaceful,” said Taliño.

Cebu City Mayor Tomas Osmeña had barred street parties and drinking along the 6-km route of the parade.

Mobile phone services were cut off as part of security measures.

Cebu City Archbishop Jose Palma, during Mass that was part of the festivities, called on all Catholics to unite for the common good. —DORIS C. BONGCAC, NESTLE SEMILLA AND NESTOR P. BURGOS JR.