President Rodrigo Duterte said on Saturday that he would impose martial law if the drug problem became “very virulent,” just a month after dismissing as “nonsense” any suggestion he might do so.

Mr. Duterte has made a brutal war on drugs a central pillar of his administration since he took office in the middle of last year.

More than 6,000 people have been killed in the antidrug campaign, in both police operations and unexplained killings by suspected “vigilantes.” Over 1 million drug peddlers and users have been arrested or have surrendered to authorities.

Mr. Duterte, speaking to members of the Davao City Chamber of Commerce and Industry at the Marco Polo Hotel, said he had sworn to protect the country against all threats, including drugs, which he said had affected about 4 million people.

“If I wanted to, and it will deteriorate into something really very virulent, I will declare martial law,” he said in Davao City.

“No one can stop me,” he said, referring to the Supreme Court and Congress. “My country transcends everything else, even the limitations.”

The Philippines endured a decade of martial law under dictator Ferdinand Marcos from the early 1970s and memories of campaigns to restore democracy and protect human rights are fresh in the minds of many people.

Last month, Mr. Duterte appeared to rule out any possibility he might declare martial law. “That’s nonsense. We had martial law before, what happened? Did it improve our lives now? Not at all,” he said.

“Don’t worry about a martial law declaration,” Pimentel said in a text message.

He said he was certain the President would conduct “a lot of consultations” before taking such move and that he would be “reminded” about its constitutional limitations.

Sen. Risa Hontiveros asked why the President was considering emergency rule when he had said that his government was winning the war on drugs.

“Why does the President seem so obsessed with dictatorial rule when the majority of the people want democratic governance?” she asked.

Hontiveros pointed to a recent Pulse Asia survey which showed 74 percent of respondents did not see a need to impose martial law now.

“There is no social and political base and/or support for martial law. It has no place in a democratic society,” she said in a text message.

Sen. Francis Pangilinan said, “What people are looking for are solutions to the rise in the price of consumer goods, salary increases and jobs, and not dictatorship or martial law.”

The minority bloc in the House of Representatives joined the anti-Duterte chorus.

“They seem to be confusing the people. The logic is unclear,” said Ifugao Rep. Teddy Baguilat.

Asked if Mr. Duterte can muster military support behind martial law, Magdalo Rep. Gary Alejano said the Armed Forces of the Philippines would “remain silent … until such time it was forced to decide.”

“He has been floating the idea and eventually he will go there because that’s what he desires. It will depend, however, on how much opposition there would be against martial law,” said Alejano, a former Marine officer.

Then President Ferdinand Marcos declared martial law in 1972, invoking threats of a communist insurgency. He lifted it in 1981, but retained his decree-making powers. 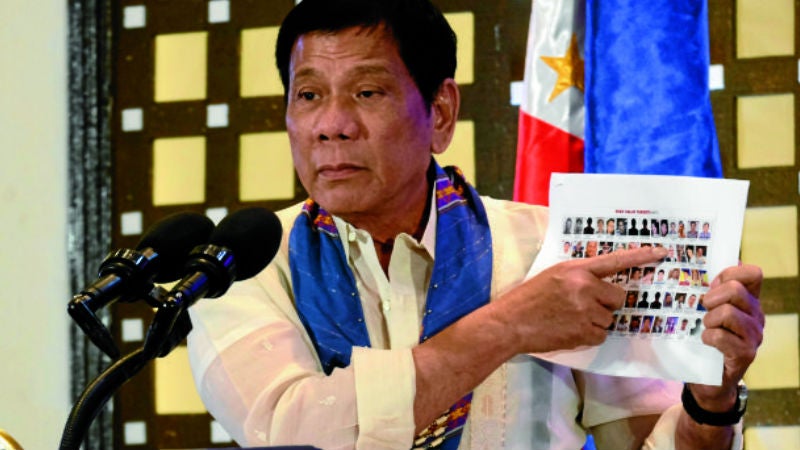 NAMES AND PHOTOS President Duterte presents the list of names and photos of alleged illegal drug personalities in his speech before members of the Davao City Chamber of Commerce an Industry at the Marco Polo Hotel in Davao City. —MALACAÑANG PHOTO

His rule ended in 1986, when Filipinos took to the streets in support of a military revolt during the Edsa People Power Revolution.

A new Constitution drawn up in 1987 in an effort to avoid another dictatorship provided that the President could impose martial rule for just 60 days and only to stop an invasion or a rebellion. Congress can revoke the measure within 48 hours while the Supreme Court can review its legality.

But Mr. Duterte said on Saturday he could ignore the 60-day limit. “The 60-day (limit) will be gone,” he said.