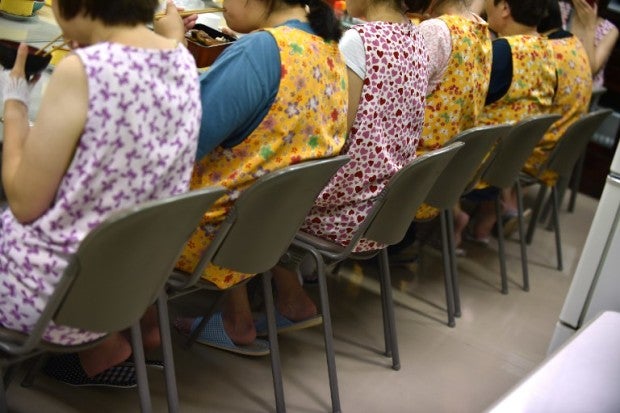 This picture taken on July 24, 2015 shows women having a meal together at a rehabilitation facility to support reintegration for former prisoners in Tokyo. For Japan’s increasing cohort of elderly prison inmates, the prospect of a life of freedom upon release is fraught with unease. / AFP PHOTO / KAZUHIRO NOGI

Every day is the same. He wakes at 6:45 am, eats breakfast 20 minutes later and reports for work at eight o’clock sharp. But this isn’t your typical Japanese salaryman.

This man is in his 80s and he is in prison — a cage of structure and certainty that he is hesitant to ever leave.

“I don’t know what kind of life I should lead after I get out. I’ll be worried about my health and financial situation once I leave,” the inmate told AFP on condition of anonymity from Tokyo’s Fuchu Prison, where he is serving time for attempted theft.

His case is not unique: Japan is in the midst of a geriatric crime wave such that its prisons increasingly look like nursing homes.

The situation has become so dire the government approved a plan to deploy nursing care staff to about half of Japan’s 70 prisons from April, allocating a budget of 58 million yen ($495,000).

In 2015, almost 20 percent of those who were either arrested or interrogated by police were aged 65 or older — up from 5.8 percent in 2000, according to the National Police Agency.

Most are imprisoned for petty crime such as shoplifting and theft.

The rise in senior crime is attributed to increased economic hardship, an ageing population, and pure greed, according to a 2013 report by the National Police Agency.

“It’s a problem that the work of prison officers is becoming more like nursing care,” Justice Ministry official Shinsuke Nishioka said, contrasting that with the traditional task of ensuring the incarcerated don’t escape.

Officers at Fuchu, Japan’s biggest male-only correctional house, have to change diapers for some prisoners and help them bathe.

“Older prisoners sometimes are hard of hearing,” Nishioka said. “They don’t understand instructions and they have to go to the toilet often. It’s tough. We’ll need more officers.”

As part of the plan to tackle the issue, authorities have also given the greenlight to a plan to send physical fitness experts to more prisons to cater to the needs of older inmates.

Prison life in Japan is far from easy — talking is forbidden while at work, inmates must walk single file, and bathing is restricted.

Even during rare events put on for their entertainment, they are only allowed to sit ramrod straight with their hands on their laps. Applause is generally forbidden.

Life is monotonous, and naturally restricted, yet many prefer this predictable regimen where they have shelter, food, and medical care, to life on the outside.

“At least (in prison) they have a roof over their head and guaranteed meals,” says Tina Maschi, associate professor at Fordham University Graduate School of Social Service.

Yukie Kuwahara, in charge of prisoner welfare at Fuchu, said inmates tend to feel anxious as the day to leave approaches.

“They don’t have to worry about day-to-day things inside prison,” she said.

‘Tough on the outside’

The recidivism rate for the over-65s is high: According to government data, about 70 percent of elderly offenders are back behind bars within five years.

“The reason why many older ex-convicts return to prisons is because it’s difficult for them to be financially independent,” said Akio Doteuchi, a senior researcher at NLI Research Institute.

“Securing housing and a job after going back into society is extremely difficult. And they’re isolated socially as more and more people are living alone,” Doteuchi added.

Halfway houses have also been set up to help ex-convicts in their early days of freedom.

One such place — Tokyo’s Ryozenkai — provides healthy elderly ex-prisoners with computer training, classes in manners and daily dinner during their 16-week stay.

But manager Terumi Obata says that four months is far too short as he believes there is a high risk of reoffending in the first two years if people do not get proper support.

“There’s no doubt financial stability is the most crucial” challenge, Obata said.

“But helping (ex-convicts) build trust with other people and teaching them there are good ones is crucial,” he said, noting many were abused or grew up in dysfunctional homes.

Having a bridge between prison and the wider world can make all the difference.

“Life is tougher on the outside,” one ex-offender told AFP. Now in her 60s, she served 15 years of a murder sentence before being released.

“Everything has changed in society, such as mobile phones and automated ticket turnstiles” at train and subway stations, she said.

She secured a cleaning job after joining a halfway house and believes she has turned a corner in her life, vowing never to return to prison.

“I want to work more regularly so that I can pay part of the earnings to the victim’s family.”/rga