In long-shot Mideast peace bid, France sees nothing to lose 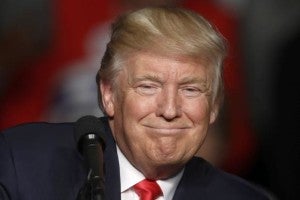 In this photo, taken Thursday, Dec. 15, 2016, President-elect Donald Trump speaks during a rally at the Giant Center, in Hershey, Pensylvannia. After a pair of diplomatic victories, the Palestinians are now setting their sights on a Mideast peace conference in France next month in a bid to rally support as they prepare for the uncertainty of the Trump Administration. The Palestinians are hopeful that a strong international endorsement in Paris will insulate them from what they fear will be a close alliance between President-elect Donald Trump and Israeli Prime Minister Benjamin Netanyahu. (Photo by MATT ROURKE/AP)

PARIS — It sounds farfetched at best: holding a Mideast peace conference without Israelis, Palestinians or the incoming US government.

But the French organizers say that’s the whole point. They want Israeli Prime Minister Benjamin Netanyahu and US President-elect Donald Trump to see that most of the world wants a two-state solution and is fed up with decades of conflict.

With chances for a Mideast peace deal lower than in years – perhaps a generation – French President Francois Hollande figures there’s nothing to lose.

French diplomats fear that Trump will unleash new tensions in the region by condoning settlements on land claimed by the Palestinians and potentially moving the US Embassy to contested Jerusalem.

So more than 70 foreign ministers and other top envoys are gathering Sunday in Paris to urge the establishment of a Palestinian state.

Netanyahu says the conference is “rigged” against Israel and refused to come. Even the organizers know it’s symbolic; no one expects a breakthrough. It’s aimed at presenting Trump with a collective international push for peace once he takes office Friday.

For Obama’s outgoing government, Sunday’s meeting marks the bitter, disappointing end of eight years of failed Israeli-Palestinian diplomacy. Days before leaving office, Secretary of State John Kerry will headline the Paris event – yet he’s participating only to ensure that America’s interest in a two-state solution is preserved.

According to a draft statement obtained by The Associated Press on Friday, the conference will urge Israel and the Palestinians “to officially restate their commitment to the two-state solution.” It also will affirm that the international community “will not recognize” changes to Israel’s pre-1967 lines without agreement by both sides.

Hollande’s government has been trying for years to revive peace-making, pointing to diplomatic successes like the 2015 Paris climate agreement, its improved relations with Israel over the past decade and hard line against Israeli rivals Iran and Syria.

But with Netanyahu snubbing the conference and Trump’s administration “reserved” about it, according to a French diplomat, Sunday’s gathering looks increasingly like an effort to isolate Israel, not entice it to the negotiating table.

Hollande too is a lame duck, leaving office in May – and his government has made no plans to follow up Sunday’s conference with enforcement measures or outreach to Trump’s team.

The final declaration may warn Trump against moving the embassy, a move that could be seen as recognizing Jerusalem as Israel’s capital after decades of insisting that the city’s status must be determined by direct negotiations.

The sides haven’t negotiated even indirectly since a failed US peace effort in 2014. Palestinian attacks on civilians and incitement to violence have heightened tensions, as has expanded Israeli settlement building.

Israel has settled some 600,000 of its citizens in the West Bank and east Jerusalem – claimed by the Palestinians for a future independent state. Israel captured both areas in the 1967 Mideast war. Netanyahu has ruled out a return to Israel’s 1967 lines, and many members of his coalition oppose Palestinian independence.

Palestinian attacks on civilians and incitement to violence.

The Palestinians have welcomed the French initiative. –Angela Charlton