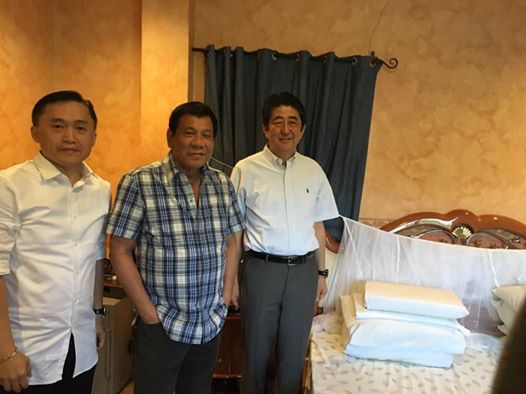 DAVAO CITY—Japanese Prime Minister Shinzo Abe ended his tw0-day official visit to the Philippines on Friday with a trip to the modest home of President Rodrigo Duterte, his volatile new friend who is shaking up the status quo in Asia.

President Duterte, a charismatic politician known at home for his folksy charm, dropped many of the formal protocols normally associated with visits by a head of government as he took Abe on a tour of his beloved southern city of Davao, some 1,500 kilometers (900 miles) south of Manila.

Abe’s day began with a visit to Mr. Duterte’s home for a breakfast of sticky rice cakes and mung bean soup, a presidential aide said, with the leaders dining at a wooden table.

With the backdrop of family photos, cups hanging from kitchen cabinets and clusters of used beer and wine bottles, Abe ate Mr. Duterte’s favorite breakfast and was given a tour of his creaky, two-story house, including a bedroom featuring the “kulambo,” or mosquito net, he sleeps under on most weekends.

Mr. Duterte’s simple living is part of the man-of-the-people style that endeared him to millions of Filipino voters who in May favored an abrasive city mayor over wealthy politicians on a largely Manila-centric ballot.

“We also showed him how the President enjoys the comfort of his own bed, including his old and favorite mosquito net,” presidential assistant Christopher Go wrote on Facebook alongside a photo of the leaders smiling while standing next to the bed.

The leaders later had a casual meeting at a hotel overlooking the sea, where Mr. Duterte was photographed in a checkered shirt and long pants but no socks, a familiar look for the 71-year-old who takes pride in his informal fashion style.

Abe’s next activity saw him standing in front of a stuffed Philippine Eagle, the national bird and one of the world’s most endangered. A ceremony saw a 2-year-old eagle named Sakura after the famous Japanese cherry blossom.

While he didn’t get to meet Sakura personally, the prime minister was given a stuffed eagle toy instead, bearing a medallion engraved with “Sakura is adopted by Mr. Shinzo Abe.” Abe was also given a photo of the eagle, which is kept at a nearby sanctuary.

Abe, normally blue-suited and politically conservative, who nevertheless showed off his fun side last year when he dressed up as video game icon Super Mario at the Rio Olympics’ closing ceremony, appeared to enjoy the day.

He smiled and laughed throughout the eagle ceremony, and ended his Davao trip at a Japanese-language school where he was greeted by singing and flag-waving children.

Abe was the first foreign leader to visit the Philippines since Mr. Duterte took office just over six months ago. He was also the first head of government to visit Davao, the largest city in Mindanao.

His two-day trip began on Thursday with a much more formal itinerary in the capital, Manila, where he held meetings with Mr. Duterte at the presidential palace.

Mr. Duterte, a longtime mayor of Davao before becoming President, has made developing Mindanao a top priority, arguing the region has been neglected by “imperial Manila.”

Abe flew from Davao to Australia on Friday afternoon as part of a trip that will include Indonesia and Vietnam.

Abe thanked Mr. Duterte for using his own money when he built a monument honoring Philippine-Japan ties when he was still mayor.

“The monument of no regret has a plaque inscribed with a Japanese message of Mr. President. In English, it says: Every human being is my brother, my sister and my child,” he said.   “And I would like to take this opportunity to express my heartfelt appreciation for President Duterte’s heartfelt gesture of welcoming our Japanese people as family members here in the Philippines.”

He expressed hope that his trip would “pave the way for further expansion of the bilateral relationship not only in an economic context but also in the areas of cultural and people-to-people exchanges.”

The meeting was robust even if no alcohol was served, he noted, and said it was probably due to the food he served.  —WITH REPORTS FROM THE WIRES

Read Next
Solve power woes, Boracay folk, traders urge DOE
EDITORS' PICK
Pagasa: Warm, sunny Sunday in most parts of PH
vivo’s coming to town to grant wishes with more holiday promos
EDITORIAL: To a bike-friendly future
The Best Tech Gifts For The 2022 Holidays
Is it safe to talk politics again at family gatherings? ‘The Reconciliation Dinner’ shows us what that’s like
House energy committee chair Arroyo bats for cheap electricity
MOST READ
LOOK: Vhong Navarro transferred to BJMP detention facility in Taguig
The Elephant Man in the Senate
Posh village as ‘shabu’ haven
LOOK: Zanjoe Marudo bonds with Ria Atayde, her family
Don't miss out on the latest news and information.