Ugandan man gets buried with $5,700 cash so he can 'bribe God' | Inquirer News
Close
menu
search 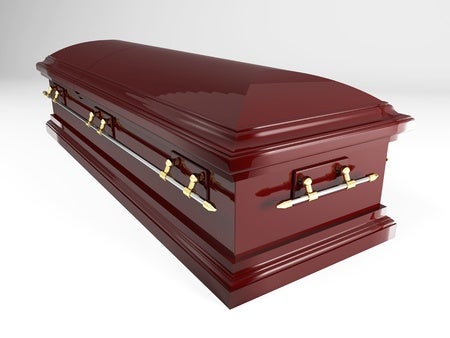 Care to take some cash with you in your big box? File photo

There’s an old saying that “you can’t take your wealth with you once you’re dead,” but one deceased man from Uganda appears to refute this claim.

Charles Obong, 52, got buried with at least $5,700 (almost P284,000) inside his casket because he reportedly wanted to give it to God as an “offertory” to forgive him for his sins and “save him from hell fire.”

The Uganda government official, who passed away on December 17 after a long bout with an unspecified illness, specifically made the request in his will, the Daily Sun reported.

But after the church discovered his bizarre request, community elders dug up the money and returned it to the man’s family, saying it was taboo to bury someone with money.

The deceased’s brother-in-law confirmed that Obong’s corpse was exhumed with $100 notes amounting to a total of $5,700.  He was buried at his ancestral home at Adag-ani village, Bar-pii parish, Aromo Sub-county in Lira District, inside a metallic coffin estimated to have cost over $5 million, the report said.

According to his family, Obong feared that his sins during his tenure—which included multiple counts of corruption—would lead him to be condemned to hell.

He also asked to have his brother and sister to be present when his body was transferred to the coffin, to make sure that his wife secured the money in his coffin.

Meanwhile, one of the members of the clergy in the area, Reverend Joel Agel Awio, was appalled by the move and said no amount of money could buy eternal life, and that God could not accept such “a golden handshake.” Khristian Ibarrola

Read Next
Chinese head home in world’s biggest annual human migration
EDITORS' PICK
Disease expert: Omicron variant may behave like Delta
Palace: Malls, establishments may require customers to use of face shields
This new condo in the South will make you want to turn a new leaf
Smart offers wireless fiber-like speeds to Filipino homes with country’s first 5G Prepaid Home WiFi
Syringes for Pfizer vaccine arriving on December 2 — NVOC chairperson
Legarda: Ending Violence Against Women, a cause for all
MOST READ
Bongbong Marcos to face another disqualification case
Christine Bersola, Julius Babao cleared of cancer after colonoscopy, endoscopy
Former PM Abe says Japan, US could not stand by if China attacked Taiwan
Tropical storm intensifies as it approaches PAR
Don't miss out on the latest news and information.