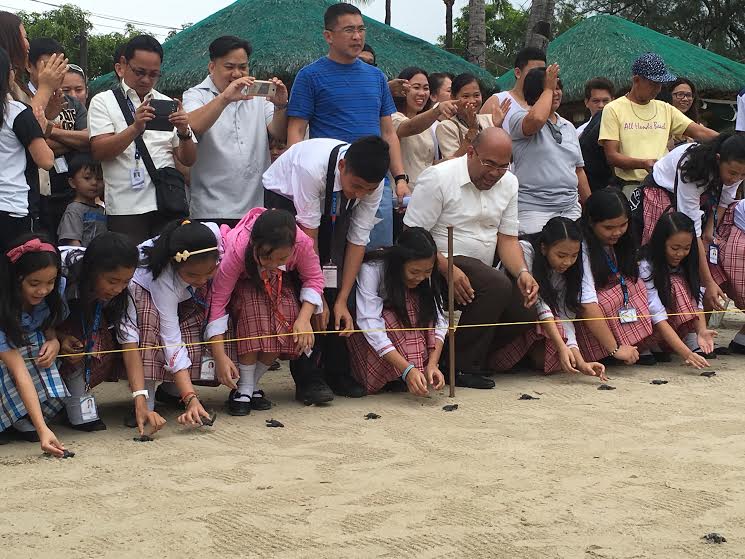 SUBIC BAY FREEPORT — More than 100 baby sea turtles  (pawikan) emerged from their nest inside a beach resort here and crawled into the open sea to begin their voyage from their birth place.

The newly hatched olive ridley sea turtles (Lepidochelys olivacea) were aided by students and tourists who helped the animals navigate the beach towards the waters off Subic Bay on Tuesday (Jan. 10).

The 103 baby sea turtles they set free raised to 3,591 the number of hatchlings, which the management of All Hands Beach had released since 2011, said Emerita Sebial, chief of the protected areas, wildlife and coastal zone management service in Olongapo City.

“Once the hatchlings are released into the sea, they will become part of our ecosystem,” Sebial told the students who took time off from their classes at the Regional Science High School III and Special Education for the Gifted inside this free port to witness the release.

Sebial said 92 other olive ridley hatchlings were released into Subic Bay on Jan. 4.

She said the female baby pawikan would return to the beach where they were born to lay eggs in the next 20 to 25 years.

“The hatchlings imprint the characteristics of their birth place so they could return to it to nest,” Sebial said.

Ameth de la Llana, head of the ecology department of the Subic Bay Metropolitan Authority (SBMA), said nearly all the seven species of sea turtles have been classified as threatened or endangered due to poaching and ocean pollution.

“Even the candy wrappers we throw into the sea contribute to the death of these marine animals,” De la Llana said.

Marife Castillo, an officer of the Olongapo City community environment and natural resources office, said olive ridley was among the three species of sea turtles found in Zambales province.

The Department of Environment and Natural Resources (DENR) has been recognizing the efforts of All Hands Beach in the conservation and protection of the marine turtles and their habitat, she said.

On Dec. 23, 2016, All Hands Beach signed a memorandum of agreement with the DENR, SBMA, the Department of Science and Technology, and environmental group Sangkalikasan to restore the dying reefs in Subic Bay.

Under the agreement, 5,000 coral fragments will be transplanted as part of the conservation efforts.  SFM