‘No mayor dared to speak out’ 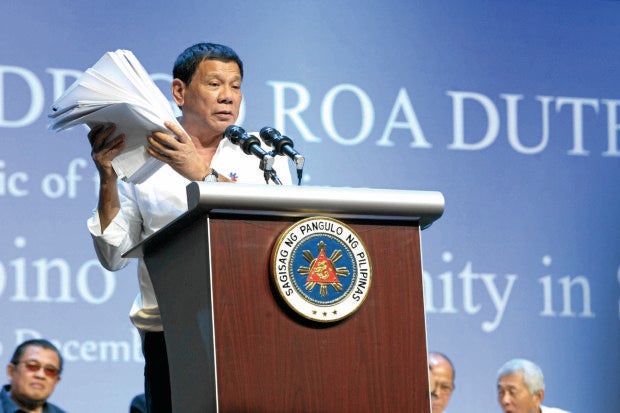 President Rodrigo Roa Duterte shows the list of the government and police officials allegedly involved in the illegal drug trade in his speech during the meeting with the Filipino community at the Max Pavilion on December 16, 2016.
ACE MORANDANTE/Presidential Photo

Normally freezing, the packed Rizal Hall in Malacañang was hot and hushed and no one dared raise a question or speak out as President Rodrigo Duterte waved his thick narcolist, cursed, ranted about his campaign against illegal drugs and threatened to kill mayors involved.

Accounts of Mr. Duterte’s separate meetings with around 1,000 mayors in three groups—from Luzon, Visayas and Mindanao—emerged immediately after the closed-door event on Wednesday that lasted well over four hours.

In interviews conducted with the mayors later (some on condition of anonymity and others on the record), the local officials portrayed the President as at once funny, at once angry and accusatory, making what one mayor said were sweeping generalizations against city and municipal mayors.

“The President spoke as if he were God, telling us who should die and who should live. It’s not the way to deal with the mayors,” lamented a mayor from Cavite province, who spoke on condition of anonymity.

“Although it’s very controversial, we fully support the campaign against illegal drugs. I think not even a single mayor would disagree with it. But he should have shown us a little respect because we were also elected by the people,” he said.

If the mayor is proven to be involved in illegal drugs, Halili said, quoting the President, “the chief of police will be replaced and the new one will be the one to shoot the mayor.”

“Would you still raise a question? He was already very clear,” Halili said. The chandeliered Rizal Hall was “very quiet” as the President spoke, he said.

“Personally, I was very happy. It served as an eye-opener to other mayors,” he said of the two-hour meeting the President had with the Luzon group.

Halili, who is called “Little Digong” because of the public shaming of crime suspects in his city, said he agreed “100 percent” with Mr. Duterte.

In an interview with Radyo Inquirer, Presidential Communications Secretary Martin Andanar described the meetings as a highly confidential “heart-to-heart talk.” He did not give details.

The President’s spokesperson, Ernesto Abella, said Mr. Duterte’s directive to chiefs of police to shoot mayors involved in illegal drugs was “not a marching order.”

“It’s just to underline the seriousness of his intention,” Abella said. The rules of engagement and due process would apply to mayors linked to the drug trade, he added.

Mr. Duterte had given advance warning to the mayors of what to expect in a speech on Monday in which he urged those involved in illegal drugs to repent, resign or die.

More than 6,000 people have been killed since the President mounted his campaign against what he called a “pandemic” in July.

“Rizal Hall is usually too cold for me, but yesterday, it was very hot,” said Mayor Danilo Fernandez of Sta. Rosa City in Laguna province.

There was the “usual expletives we’ve all gotten used to,” Fernandez said.

Mayor Vicente Loot, a retired police chief superintendent, of Daanbantayan in Cebu province, and some judges were mentioned by the President, Fernandez said.

“You could feel his anger at Loot,” he said.

Asked for comment, Loot said, “I just smiled. I expected it because I’m his favorite.” Loot is one of five high-ranking police officers accused of involvement in the drug trade.

Mayor Edgardo Pamintuan of Angeles City quoted the President: “Help me fight the menace … Those who are involved and are in this thick set of papers, show me you are not …. Don’t fool me …. Come clean and fight drugs otherwise you will incur my ire.”

Pamintuan said the President told them he had no plans of declaring martial law, calling it “circuitous and difficult.”

“He was actually joking at times. But personally, what irked me is how the President treated us as if majority of the mayors were drug suspects,” said a Cavite mayor, who asked not to be named.

“For me, I really felt threatened. I have never been disrespected like that in my life. I should not have gone to that meeting,” the mayor added.

Another mayor, who claimed to be Mr. Duterte’s personal friend, said: “The President only proved that he has this tendency to be a dictator. He was supposed to treat us as partners, but he was clearly imposing on us.” —WITH REPORTS FROM AIE BALAGTAS SEE, CONNIE FERNANDEZ, JOEL FRANCO, NESTOR CORRALES AND TONETTE OREJAS

Read Next
Investors welcome end to SBMA row
EDITORS' PICK
Heads may roll at BOC, says Palace if sugar smugglers are allowed to use recycled import permits
What to watch out for when selecting a video surveillance solution
Apple warns of flaw that lets hackers into iPhones, Macs
House energy committee chair Arroyo bats for cheap electricity
46% of schools nationwide to have full face-to-face classes on Aug. 22
vivo brings to the Philippines a powerful smartphone with a slimmer body, the vivo Y02s for only PHP 6,499
MOST READ
DepEd to give teachers P5K cash allowance within first week of classes
LOOK: Miel Pangilinan dazzles in glittery pre-debut shoot
Man abducted in Batangas gasoline station, found dead in Quezon
Dressing the dead: Indonesian villagers clean corpses in afterlife ritual
Don't miss out on the latest news and information.