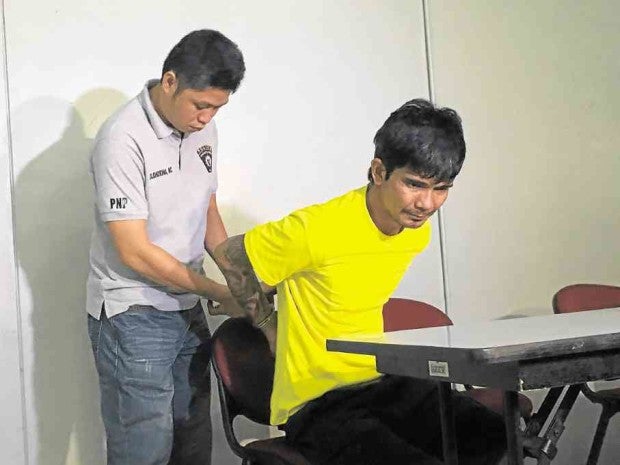 Following his arrest at the Batangas port, Randy Lizardo (right) has admitted shooting at the officers who were alerted to the drug session taking place at his shanty in Pasay City on Jan. 4.  Dexter Cabalza

One of the suspects in last week’s killing of a Pasay City policeman was arrested while waiting to board a ship together with his live-in partner and infant son at the Batangas port on Wednesday morning, officials said.

Randy Lizardo, 34, whose criminal record had earned him the moniker “Randy Demonyo” in his Pasay neighborhood, was bound for Oriental Mindoro when apprehended, according to the National Capital Region Police Office chief, Director Oscar Albayalde.

Lizardo, along with two other men who remain at large, admitted killing  P01 Enrico Domingo and wounding P02 Harley Garcera on Jan. 4. The officers were part of a three-man team who responded to a report about a drug session on Pestanas Street, Barangay 69, where they were met with gunfire upon entering one of the shanties.

In an interview, the detained Lizardo said he only fired at the officers from behind a curtain because they also tried to arrest his live-in partner, Gemma Piquillo, while holding his family at gunpoint. “Any father would do that if he sees a gun pointed at his wife and child.”

But this was denied by Southern Police District director, Chief Supt. Tomas Apolinario Jr., who said the officers had not yet drawn their guns when they were shot.

Lizardo also admitted having a shabu session that day. According to Albayalde, the man also known as Randy Demonyo has several other cases pending in Pasay courts for murder, frustrated murder, attempted homicide, robbery-holdup, theft, and illegal possession of a deadly weapon.

Read Next
Skeletons in the basement
EDITORS' PICK
DOTr to defend proposal to increase passenger capacity in public transport
Work-From-Home is here to stay and requires reliable logistics
USAID Opportunity 2.0 calls for applicants for grants for out-of-school youth engagement
Pharmally scandal: When middlemen profit even during a pandemic
The crisis within: Suicides rise as COVID takes its toll on lives, livelihood
Legarda emphasizes role of ICC/IPs in nation building this IP month
MOST READ
Bongbong says PH should modernize infrastructure to become Asia’s next logistics hub
PDP-Laban’s Cusi wing inks coalition deal with Reform Party
Isko to critics after remarks vs Robredo: I’m sorry, this isn’t about Mr. Congeniality
Pharmally scandal: When middlemen profit even during a pandemic
Don't miss out on the latest news and information.