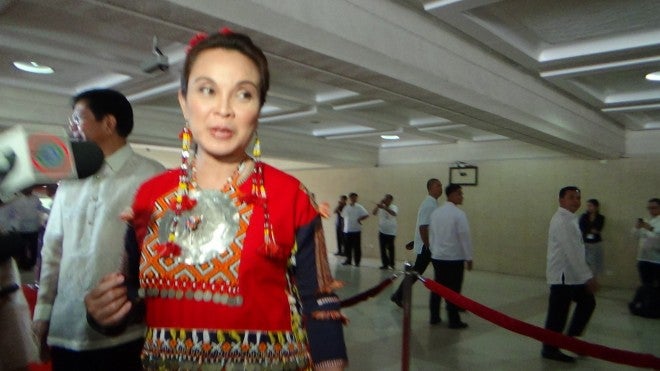 MANILA, Philippines — The Senate is expected to give priority to bills seeking to create a new Department for Arts and Culture, Sen. Loren Legarda said Thursday.

Speaking at the the oath-taking of newly elected National Commission for Culture and the Arts chair Virgilio Almario, Legarda said her bill, along with other similar proposals, would undergo hearings at the Senate Committee on Education within the quarter, as its chair Sen. Bam Aquino has agreed to give it priority.

“We have a proposal at the Senate to create a Department of Culture and the Arts (DCA), which aims to boost and give greater attention to our culture and arts sector,” she said in her speech.

“During our caucus (Wednesday night), Sen. Bam Aquino, who chairs the education committee — the bill is there — agreed to give priority on hearings and enactment (of the bill) hopefully by this year,” she said.

The new department shall have undersecretaries assigned to cover functions that the separate agencies currently handle.

“This will make the head of the department cabinet-level. It (new department) will get annual allocation. All those (arts and culture) now can work more closely together, and they will have greater focus,” Legarda told the Philippine Daily Inquirer in an interview.

Senate Bill No. 664, Aquino’s parallel proposal, also seeks the same reorganization of the NCCA, saying this would “expand its mandate and award the body with more authority in planning, coordinating and implementing the country’s programs for the conservation and promotion of culture and the arts.”

Almario, a national artist for literature, expressed hopes for the passage of the bill as he outlined his priorities as NCCA chair, including an emphasis on the preservation of the country’s “intangible heritage,” including native languages which serve as “a repository of knowledge.”

“What we do with tangible heritage, such as buildings and churches, we should continue. But I want to convey that we should give attention, funding and diligence to improve efforts and give importance to our intangible heritage,” Almario said in his remarks.

Such would contribute to the Filipino’s discovery of its own identity, he said.

He also called on Filipinos to look back to history beyond the country’s colonial past: “If we look back farther in our memory, we will discover more about ourselves. We will exert greater efforts and further study our intangible heritage.”

Legarda administered the oath on Almario during simple rites Thursday morning at the NCCA office in Intramuros, Manila.  SFM

Read Next
Pacquiao told: Death penalty revival not a pet bill
EDITORS' PICK
Work-From-Home is here to stay and requires reliable logistics
Climate Change Commission and Nestlé PH to discover sustainability-focused solutions
FDA reviewing COVID-19 vaccines’ EUA for booster shots
Legarda emphasizes role of ICC/IPs in nation building this IP month
NCR’s COVID-9 alert level may be downgraded from 3 to 2 soon — DOH
Biden vows to stand with Asia on freedom, hits at China on Taiwan
MOST READ
Drivers now required to take driver’s education upon license renewal – LTO
Can Marcos Jr. be disqualified?
Marcos Jr’s ‘special diploma’ from Oxford: You can have it, too
Gordon to Duterte: You? Teaching me courtesy?
Don't miss out on the latest news and information.