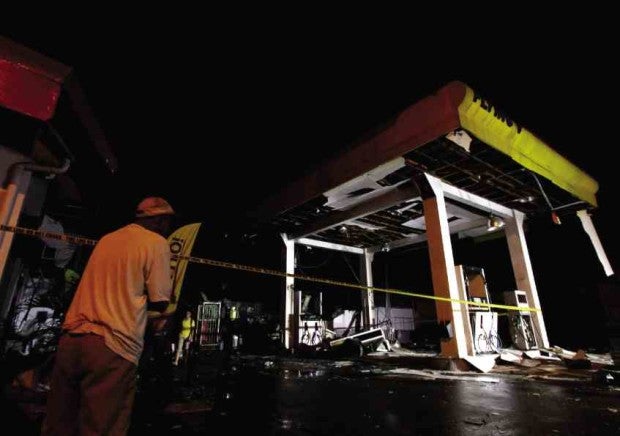 One of the two gas stations destroyed by a fire early Wednesday morning on Sandoval Avenue in Barangay San Miguel, Pasig. —RICHARD A. REYES

Twenty-one people were injured—13 of them in critical condition at press time due to serious burns—in an explosion at an LPG (liquefied petroleum gas) refilling station in Barangay San Miguel, Pasig City, early Wednesday morning.

Most of the injured were stay-in employees at the Regasco station located in the Omni Gas Corp. (OGS) compound on Sandoval Avenue.

The blast set off a two-hour fire that spread to  neighboring establishments, including a Flying V gas station which sits on a lot shared with the OGS employees’ bunkhouse.

According to a report submitted to Supt. Arturo Marcos, Pasig City fire marshal, people in the area started smelling a gas leak around 12:30 a.m. The smell prompted employees of the  Flying V station to evacuate.

Senior Insp. Anthony Arroyo, fire investigation chief of BFP-Pasig, said LPG fumes had already permeated the compound when the explosion happened at 1:06 a.m. As the probe got underway, he said the leak may be due to “improper maintenance.”

The station had no fire code violations and was issued a fire safety certificate, according to Cesar Mendoza, officer in charge of the city’s Business Permit and License Office which covers Barangay San Miguel.

The blast victims suffered mostly third-degree burns and were brought to various hospitals. Aside from the OGC employees, they included Epifanio Ausa, 50, a worker at the neighboring FCS Furniture & Garments who sustained a cut in his left foot.

Joel Castillo, an LPG delivery truck driver who was among the injured, told investigators that he was advised by a co-worker to go to the station to help fix “a technical problem” hours before the explosion.

Upon reaching the place, Castillo learned from another worker that the problem had already been fixed—but that’s when the explosion happened.

In an interview Wednesday afternoon, Rony Badidles, officer in charge of the LPG Marketers’ Association partylist group, said the building housing the station is owned by the LPGMA and the family of its congressional representative, Arnel Ty.

Authorities estimated the damage to be about P20 million.