Assistant City Prosecutor Johanne Noel Mingoa, 46, was walking to his parked vehicle around 1:20 a.m. when a dark-colored car of still unknown type and plate number pulled up beside him in front of the Cebu Lechon Sutokil restaurant in Barangay Old Balara.

An eyewitness said a man clad in black shirt and pants walked up to Mingoa from behind and shot him at the back. Even though the victim already fell to the ground, the gunman reportedly fired at the victim several more times, causing multiple gunshot wounds that led to Mingoa’s death.

Recovered from the scene were 14 fired cartridge cases of a .45-handgun, suggesting that the killer emptied an entire magazine.

On the same day, they released a facial composite of the gunman, who reportedly stood around 5’6″ and of light heavy build.

Eleazar said they have been investigating whether the motive behind the slay was personal or related to his work in the judiciary.

Information gathered by the police showed that Mingoa met with three men inside the Superstar Club, about 40 meters from where he was shot.

Eleazar said initial investigation has revealed that Mingoa invested some P3 million for a certain business, but reportedly failed to receive any returns. Police are still validating the exact nature of the business.

Mingoa’s wife informed the police that her husband was in the establishment to meet with the men for a “business transaction” related to the investment. 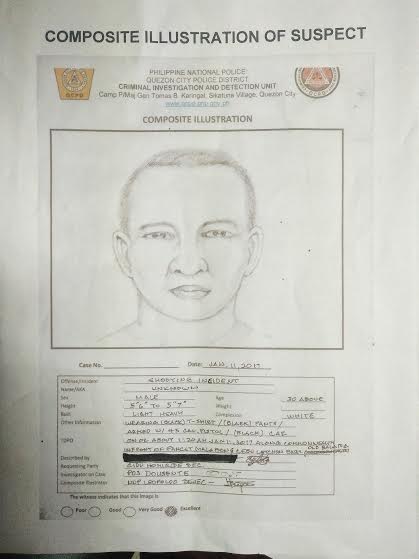 Text messages from the cell phone of the victim revealed an exchange with one of the men, saying that some of the dollar returns he allegedly received from his investment turned out to be fake.

Messages from his wife also warned him against the meeting.

Senior Insp. Elmer Monsalve, homicide division chief, said the police already got the names of the three men, whom they considered persons of interest in the case, as of Wednesday. They have not yet spoken with the investigators.

The police are now gathering footage from closed-circuit television (CCTV) cameras in the area that may shed light on the case.

Lee said the victim was a trial prosecutor for the Regional Trial Court and had handled “all kinds of cases.”

“I don’t recall him handling any controversial or high-profile cases, but it is possible that he was working on a few drug-related ones,” he told the Philippine Daily Inquirer.

The chief prosecutor also revealed that Mingoa used to handle a court on illegal drug cases three to four years ago.

“If this is work-related, then the message is clear that prosecutors should be careful and cautious because what happened to Mingoa could happen to all of us,” he said.

He said the prosecutors would like the public to know “we are only doing our job, and it is not personal.”

Lee recalled that Mingoa was very active as a prosecutor. At the time of his death, he was applying to become a senior assistant prosecutor in the city.

On Tuesday, hours before his death, Mingoa was reportedly on inquest duty, which is done only twice or thrice a month. He worked from 7 p.m. to 11 p.m., Lee said, accommodating all inquest referrals to his office.

“He left the office around 11:15 p.m.,” he noted. Eleazar said the police would also gather CCTV footage from around his office inside the city hall compound for any leads.

Before serving in public office starting 2008, Mingoa was private practice. Lee noted that for a year, he was connected with Justice Secretary Vitaliano Aguirre II when he worked in the latter’s private law firm.  SFM