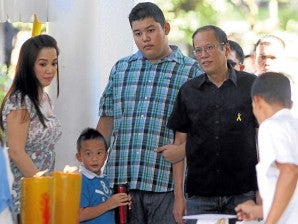 President Benigno Aquino III visited the graves of his parents at Manila Memorial Park in Parañaque City on Monday, a day before the customary All Saints’ Day observance.

The President, along with his sisters Ballsy Aquino-Cruz, Viel Aquino-Dee and Kris Aquino, and other relatives, heard a short Mass at the family mausoleum where former President Corazon Aquino and former Senator Benigno “Ninoy” Aquino Jr., are entombed.

Kris, who acted as the spokesperson of the family during the visit, said they decided to come Monday so as not to cause “inconvenience” to the public today, Nov. 1, when a huge influx of visitors is expected at the country’s biggest private memorial park.

“It was a family decision to come today (Monday) so we won’t cause inconvenience to the public tomorrow,” she said.

Presidential security guards were stationed near the Aquino mausoleum six hours before the President arrived.

The Aquinos’ tombs, one of the most-visited at the grassy memorial park, was closed to public viewing at noon and reopened three hours later to allow the President and his sisters private time.

Nonetheless, news of the president’s visit drew a crowd of a few hundred.

Hours before the President and his entourage arrived, supporters had patiently gathered behind a cordon. They shouted his name as he alighted from his car.

The cheers went a decibel higher when Kris Aquino stepped into view. The actress and TV celebrity came with her two sons, Joshua and James Jr.

The crowd also took advantage of the President’s presence by taking photos of themselves with the Aquino family in the background.

Some visitors said it had always been their practice to pay their respects to Ninoy and Cory, both national icons. Most sought permission from the Presidential Security Group to come close to the tombs adorned in yellow flowers and candles to say a short prayer.

“We were here before noon because we heard the President was coming… with Kris,” said Lito Baliber, one of the visitors to the Aquino mausoleum.

Angelita del Rosario’s face lit up when she heard the Aquinos had arrived at 2:30 p.m. She had brought along her mother, daughter and even two grandchildren as they waited to see the Aquino family.

“I was on my way to visit my late husband but when I heard the Aquinos were coming, I stopped by here first,” she said.

The President, wearing his signature black shirt with a yellow pin and dark denim pants, carried a solemn expression throughout the Mass officiated by Archbishop Angel Lagdameo except when he exchanged a few gestures of endearment with his nephew, Josh.

His other nephew, James “Bimby” Yap Jr., also caught the attention of the crowd.

Bimby stole the scene from the President when he went out of the tent and greeted the crowd. He said “hi” when the fans waved. A fan shouted “I love you Kris” but Bimby reacted and said “No!”

The visit was briefly interrupted when a man got past the cordon and shouted his support for the burial of former dictator Ferdinand Marcos at the Libingan ng mga Bayani. The man was pulled away by guards.

“Matagal na kaming naghihintay na maburol si Marcos sa Libingan, shouted the man, as he was accosted by presidential guards and brought to a police outpost.

The crowd’s attention went back to the Aquinos as the President finished the Mass, appearing unperturbed.  With a report from Alvin Barcelona, dzIQ