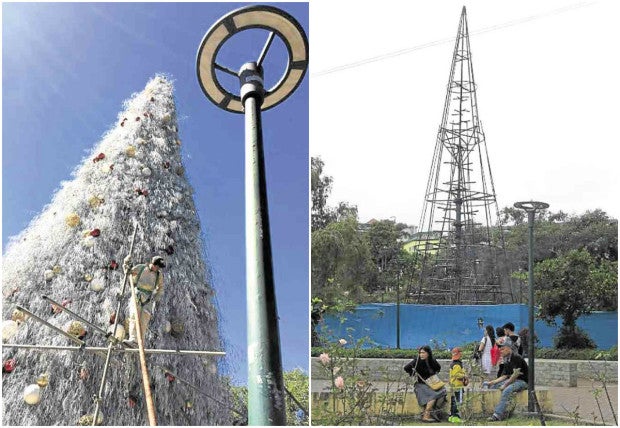 The summer capital’s Christmas tree, made of recycled materials, before and after the fire. —VINCENT CABREZA AND EV ESPIRITU

BAGUIO CITY—Fire struck the city government’s Christmas tree at Burnham Park here on Tuesday night, and arson investigators suspected it could have been started by pranksters.

The 12-meter tall tree was made from welded scrap steel, salvaged from the demolished warehouse of the city buildings and architectural office.

It was decorated with twigs and recycled materials and was estimated to cost P500,000.

The fire broke out at 8:50 p.m., according to an employee of a hotel near the park.

Witnesses saw two men running away from the burning tree, so investigators had been checking footage of closed-circuit television cameras put up around the park.

But investigators also detected faulty electrical wiring leading to the tree, police said, adding that the tree was being dismantled and the wiring may have been exposed to drizzle on Tuesday night.

A park security guard said some of the tree’s decorations had been taken down before the fire struck.

The city government used to put up its Christmas tree at a rotunda on upper Session Road but had opted to install it last year at Burnham Park’s rose garden.

Years ago, the city government dressed up a giant Norfolk pine tree at the foot of Session Road to make it the seasonal Christmas tree until environmentalists expressed concern that the weight of the decorations had damaged it. —KIMBERLIE QUITASOL