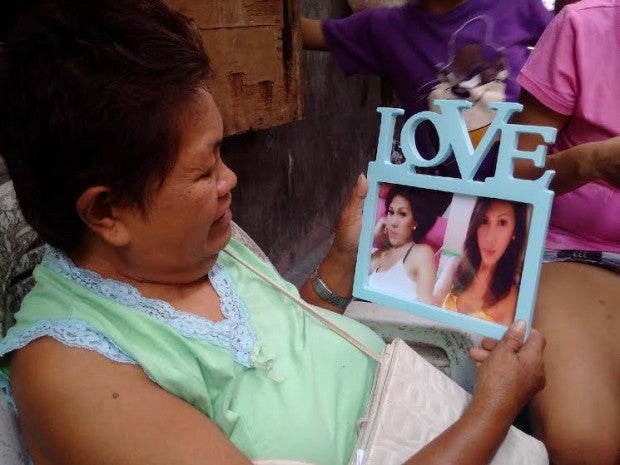 Elena de Chavez shows the photograph of her only son, Alvin Ronald de Chavez, who had become a transgender named Heart. Heart, who was on a drug watch list in Navotas, was shot dead by several men on Tuesday night. (PHOTO BY AIE BALAGTAS SEE / INQUIRER)

MANILA — Armed men stood in front of a chapel on Quintos Street as they watched their accomplice shoot and kill a transgender who went by the name Heart on Tuesday night in Navotas.

Heart’s neighbor, Antonio Sigue said six or seven men in black jackets stood there as they waited for the gunman to finish the job in front of a shanty about 20 steps away.

When the gunman was done, Sigue heard him say: “Okay na.”

Sigue said the shooter casually walked away “as if nothing happened” leaving Heart, whose real name was Alvin Ronald de Chavez, bathing in his own blood that seeped from his face and chest.

When Heart’s 61-year-old mother Elena found him minutes after the killing, she lifted his head and embraced her only son.

“I tried to carry my son. I’m not sure if he’s still alive but his body was soft and warm. There were no words coming out of his mouth,” Elena de Chavez told the Philippine Daily Inquirer.

“Then I told him ‘di ka kasi nakikinig sa amin (you did not listen to us),'” she added.

Barangay San Jose Kagawad (village councilman) Boyet de Guia said Heart was on the barangay’s drug watch list. Heart was encouraged to surrender but De Guia was not sure if he turned himself in.

Elena said Heart started selling drugs in November 2016. He got into the business, which helped him earn P500 a day, to help feed his family.

“We already told him not to sell drugs but he said ‘ma, pangkain lang (ma, this is just to buy food),'” Elena said.

Elena and her eldest daughter Analyn de Chavez said Heart was arrested by Manila policemen in Pritil, Tondo, last Sunday. He did not have drugs at that time but they confiscated his cell phone, which contained messages of drug transactions.

Analyn said the police used that as evidence against Heart. They were not able to get the policeman’s name.

Elena added that cops in Pritil did not file a formal case against Heart “because the police asked us to pay 50,000” for his release. Elena said they could only come up with P10,000. The cops accepted the money and set Heart free.

Three days later, armed men wearing face masks and black jackets barged inside their shanty in Navotas about 11:30 p.m. They collared Heart and grabbed him outside.

Then, one of them took Heart in front of a shanty with a tiny pink door about 30 meters away. The rest stayed in front of the chapel, the only place in the alley that was well lighted.

“We saw them walk away. They were laughing,” Elena said.

Elena and Heart’s other sister Arriane called his death “brutal.”

The bullets pierced his brain, lungs, liver, and parts of his heart. “Just the shot in the head is enough to kill him but they still shot him several times,” Arriane said.

The De Chavezes and Sigue said the gunmen were tall and burly, and were all wearing face masks and black jackets.

While Elena talked about her son, Analyn pulled a turquoise picture frame that had two photographs and the word love. Analyn gave it to Elena who said: “look at him Mam.” Elena pointed at pictures where Heart looked and dressed like a woman. “He’s so pretty. What a waste,” Elena Saud.  SFM

Read Next
Duterte threatens, curses at mayors during Palace meeting
EDITORS' PICK
New Year, New Rediscoveries
Acer Philippines welcomes you to its first flagship store
House inquiry on unilateral termination of UP-DND accord pushed
Gov’t mulls review of age restrictions by end-January or February — official
PHI and Primark vs. Premier, SM Investments Corporation and CAIL
Duterte not consulted on decision to end UP-DND accord, says Palace
MOST READ
Sotto chides Roque’s ‘war-like’ remark: You expect us to treat resource persons with TLC?
Plagued with ailments, ex-vegan finds ‘cure’ in carnivore diet
Woman, 21, shot in broad daylight in Cotabato town
Mom, GF of UK variant patient, and 9 others test positive for Covid-19
Don't miss out on the latest news and information.