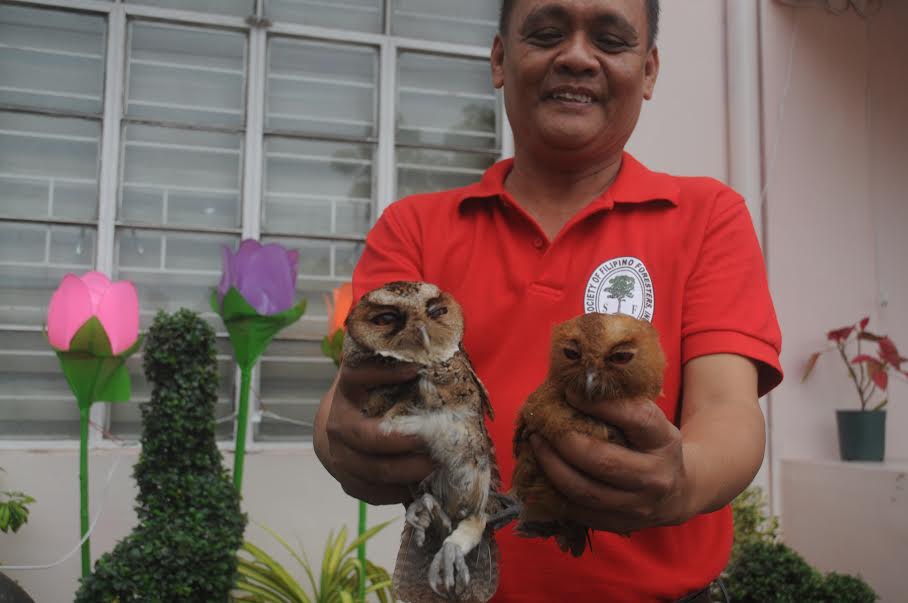 Albertson Sagun, the provncial environment and natural resources officer in charge of wildlife in Pangasinan, shows the two Philippine scops owls turned over to their office on Wednesday. The owls were found by concerned residents in the towns of Calasiao and Mangaldan on Tuesday. (PHOTO BY GABRIEL CARDINOZA/ INQUIRER NORTHERN LUZON)

Leduina Co, provincial environment and natural resources officer (PENRO), said one of the owls was found in the morning in Calasiao town while the other bird was found in the afternoon in Mangaldan town.

“This is the first time that scops owl were turned over to our office. In the past, residents often stumbled upon grass owls,” said Co.

According to www.birdwatch.ph, the official website of the Wild Bird Club of the Philippines, the scops owl (Otus megalotis) thrives in lowland forests, forest edges and elevated pine forest.

Scops owls are not a threatened species, and are endemic to the Philippines, according to Albertson Sagun, who oversees the PENRO wildlife division.

As nocturnal bird, scops owls feed on insects, and are not recommended as pets because they are not easy to feed. “They prefer to catch their food,” Sagun said.

He said the office has been trying to determine why the scops owls suddenly appeared in the province.

Co said the rescued birds would be released to the protected areas of Pangasinan province.

“We just have to make sure that the birds are strong enough before releasing them,” Co said.  SFM