Over 1,300 flee floods in Davao Norte 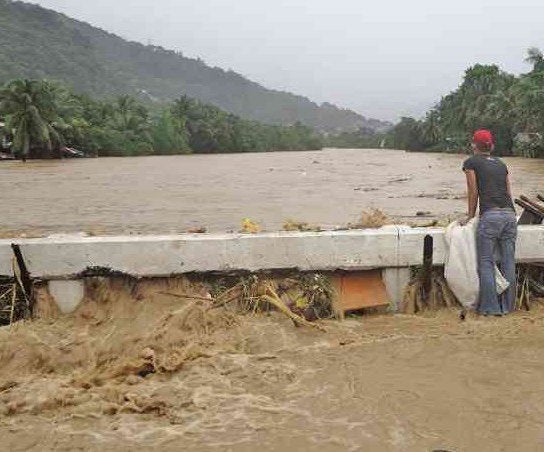 The flashfloods hit low-lying areas of Pag-asa, Maniki, Katipunan and Suaon after heavy rains in the Pantaron range, which cuts through Kapalong and Talaingod municipalities, caused the Libuganon River to spill over its banks, Chief Insp. Michael Seguido, Kapalong police chief, said.

At least 16 houses were submerged in flood waters at the village center of Maniki, while the local government ordered a suspension of classes from pre-school to high school in the affected areas, Seguido said.

“Our police personnel as well as soldiers from the Bravo Company of 60th Infantry Battalion were deployed to help rescuers from the municipal disaster risk reduction management council implemented pre-emptive evacuations,” Seguido said.

The local government said a total of 293 families or 1,392 persons have evacuated.

At 6 p.m. on Tuesday, Kapalong and most of Davao del Norte experienced a heavy downpour brought about by a localized thunderstorm, raising concerns that another flooding might be on the way.

Although flood waters, which in some areas were several feet deep, had subsided by Tuesday afternoon, many of the evacuees did not return to their communities as of yet, the police official said.

“We are closely monitoring the situation especially now that there was a heavy downpour,” Seguido said. He said residents in low-lying areas along the banks of Libuganon, particularly in nearby town of Asuncion, have been alerted as flood waters from Kapalong descend downriver and swamp these areas.  SFM