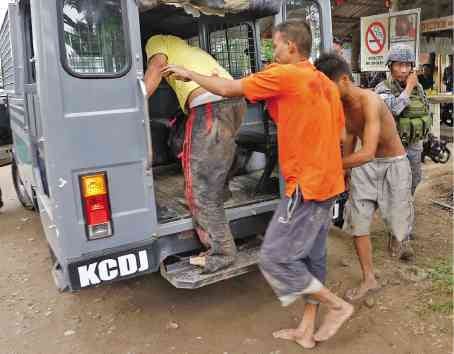 Fugitives rearrested after the Jan. 4 jailbreak at the North Cotabato District Jail in Kidapawan City board a police vehicle that will take them back to the prison compound. —JEOFFREY MAITEM

KIDAPAWAN CITY—The provincial government of North Cotabato has offered up to P1 million for the arrest of each “high-risk” inmate who bolted the provincial jail here last week.

Acting Gov. Shirlyn Macasarte-Villanueva said among the 99 inmates still on the run is bombing and murder suspect Esmael Nasser, alias “Derbi,” and considered among the dangerous inmates.

Nasser was among the 158 inmates who escaped when a group of heavily armed men, believed to be members of a breakaway Moro rebel group, stormed the North Cotabato District Jail (NCDJ) on Jan. 4.

Since the jailbreak, 49 fugitives had been rearrested or had surrendered, while 10 others were killed in the manhunt.

Villanueva said the province is also offering P10,000 for people who will turn in fugitives charged with lesser offense.

Interior Secretary Ismael Sueno relieved the chief of the Bureau of Jail Management and Penology (BJMP) in Central Mindanao and the warden of NCDJ days after the jailbreak.

Security had been beefed up at NCDJ to prevent a repeat of the incident.

North Cotabato Board Member Socrates Piñol said high-profile inmates in NCDJ, or those facing heinous crimes, should be moved to well-secured facilities, such as Camp Bagong Diwa in Metro Manila.

In a letter to Villanueva, Piñol said the transfer of inmates facing illegal drugs and murder cases was the only solution to secure the jail from attacks.

The Jan. 4 jailbreak was the latest of such incidents.

On Feb. 3, 2007, an armed group also stormed NCDJ and freed 49 inmates, most of them hardened criminals.

In June 2009, a jail guard was killed while three others were wounded when armed men tried but failed to rescue 12 suspected bombers and kidnappers detained at the same facility.

Villanueva said she will endorse Piñol’s request to the BJMP national office.

The Inquirer learned that the BJMP had approved requests for transfer of high-profile inmates from smaller prisons to well-secured facilities in Metro Manila.

In October, Datukan Samad, alias “Commander Lastikman,” a leader of an extortion gang blamed for bus bombings and other crimes in Central Mindanao, was moved to Camp Bagong Diwa after an attempt by his followers to take him out of the Maguindanao provincial jail five years ago.

Samad was moved to Maguindanao after his followers stormed the Kidapawan City jail in 2012. Three persons were killed in the attack and about a dozen others were wounded. —WILLIAMOR A. MAGBANUA AND EDWIN FERNANDEZ