Man arrested in the case of the ‘HOLLYWeeD’ sign 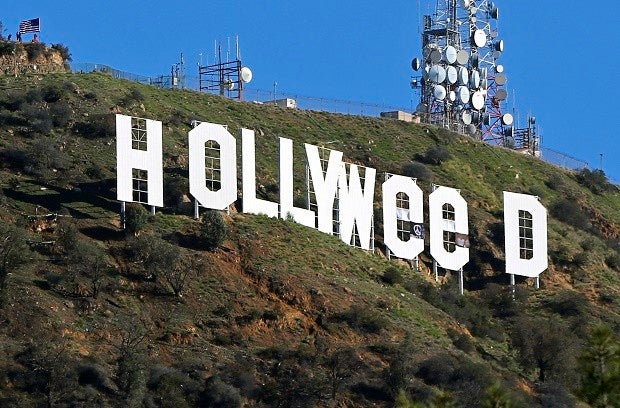 In this Jan. 1, 2017, file photo, the famed Hollywood sign is seen altered to read “HOLLYWeeD,” in Los Angeles. Los Angeles police said in a statement that 30-year-old Zachary Cole Fernandez was arrested Monday, Jan. 9, 2017, in connection with the vandalism. Police say Fernandez turned himself in with his attorney and was booked on suspicion of misdemeanor trespassing. AP FILE PHOTO

LOS ANGELES — Los Angeles police have made a “HOLLYWeeD” bust.

The LAPD said in a statement that 30-year-old Zachary Cole Fernandez was arrested Monday, just over a week after a prankster used white tarps to make the “HOLLYWOOD” sign to read “HOLLYWeeD.”

Police say Fernandez turned himself in with his attorney and was booked on suspicion of misdemeanor trespassing.

The prankster was dressed in black and was recorded by security cameras in the area changing the sign early New Year’s Day.

Fernandez, an artist, had already claimed credit for the stunt in a Vice magazine interview, but police had not previously confirmed his involvement.

He’ll be released on his own recognizance and must return to court Feb. 15. Contact information to request comment could not be found for Fernandez or his attorney./rga

Read Next
Worshiper stabs pastor during TV service
EDITORS' PICK
UK’s Boris Johnson will resign, BBC reports
Unemployment rate up to 6% in May
Geek out at TOYCON 2022 powered by Smart Signature
High inflation: Your P1 is now worth only 87 centavos
High-risk pregnancy: Reducing your risk is in your hands
House energy committee chair Arroyo bats for cheap electricity
MOST READ
Suspect in grisly killing of missing woman in Bulacan arrested
Kim Atienza’s daughter flaunts bikini body in response to critics of her ‘revealing photos’
Japanese artist who created ‘Yu-Gi-Oh!’ found dead in the sea
FDA probes popular Filipino noodle brand for ‘high level of ethylene oxide’
Don't miss out on the latest news and information.