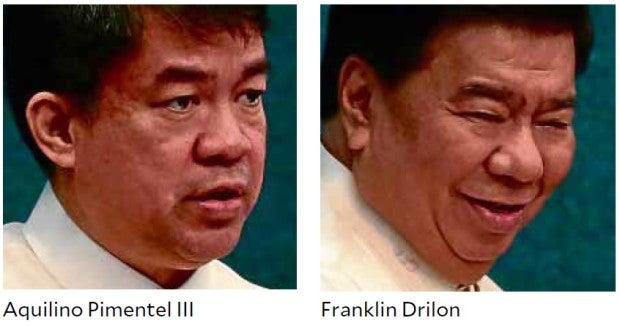 Senate President Aquilino “Koko” Pimentel III sees nothing wrong with lawmakers identifying pet projects for inclusion in the national budget for funding as long as they do not interfere in their implementation, which is barred under the 2013 Supreme Court decision that declared the pork barrel system unconstitutional.

Pimentel also denied Sen. Panfilo Lacson’s claim that Malacañang had asked senators to submit a list of projects amounting to P300 million each for inclusion in this year’s P3.35-trillion General Appropriations Act (GAA).

Senate President Pro Tempore Franklin Drilon, however, confirmed he had submitted to the Duterte administration projects for funding in his Iloilo home province.

“A lot of laws express ideas or sentiments from lawmakers,” Pimentel told reporters on Monday.

“So why should the budget be exempted from this phenomenon, especially if the executive branch is open to accommodating and accepting (proposals) from lawmakers?” he asked.

“There are no pork barrel items in the 2017 budget,” Abella said in a text message. He said that the GAA conformed with the Supreme Court ruling.

The court declared illegal the involvement of lawmakers in the implementation of projects upon the approval of the budget, following widespread public outrage that pork barrel funds amounting to some P10 billion meant to ease rural poverty were diverted to ghost projects and kickbacks.

The high court called for prosecution of people who benefited from the system over the past two decades.
But the Office of the Ombudsman has so far indicted only three senators and a few congressmen and government officials.

Lacson stood by his assertion that this year’s GAA had pork insertions and that senators had been asked to submit their pet projects for funding of up to P300 million.

A day after he said that the Palace and Congress had connived to keep the pork barrel alive, Lacson, who is in China for an official visit, tweeted his colleagues: “I’m sorry if I put my colleagues on the spot. My advocacy against pork in whatever form, shape and design stands taller than camaraderie.”

Lacson, who has become the lone voice in Congress against the pork barrel in the national budget, told the Inquirer on Sunday that in order to get around the court ruling, lawmakers were asked to identify their projects prior to the budget’s submission to Congress, during the budget deliberations and even during the bicameral conference.

Lacson provided a copy of a pro forma file or standard document on which congressmen purportedly listed their pet projects for inclusion in the budget.

The House leadership denied the existence of such a document.

Saying he and Lacson had a “technical difference” in the definition of pork barrel, Pimentel told reporters he accepted the court’s ruling prohibiting lawmakers from interfering in the implementation of their pet projects after the budget law had been passed.

“That is the act that we should guard against—not that lawmakers have their ideas or proposals incorporated into the budget,” Pimentel said.

Asked on Lacson’s claim that senators were given projects worth P300 million each, Pimentel said there was no such discussion.

“I have never heard an instruction to submit X amount of projects,” he said.

Lacson stood by his claim that there were P300 million submissions by the senators, pointing out that Senate Majority Leader Vicente Sotto III and Sen. Francis Pangilinan confirmed that they too were asked to submit their pet projects but that they desisted.

Drilon acknowledged that he had submitted a list of projects to the executive department and that it was less than P300 million.

“I’m not ashamed of it, it’s up to the President to review it. That’s the essence, that’s the basis of the disapproval by the Supreme Court of the PDAF system because the project is inserted into the budget after the enactment,” Drilon told reporters.

Drilon said he submitted for funding a flood project in Iloilo, his home province. He explained the “reality” was that lawmakers suggested programs.

“What is critical is that such proposals are reviewed by Congress when it is submitted and most important, it can be vetoed as a line item by the President and its release is subject to the approval of the President,” he said.

“That is the basic difference between the system before and the system now. The submission before a project during the PDAF time will leave no choice to the President but to implement the project. Today that is not so,” Drilon said. —WITH A REPORT FROM MARLON RAMOS