‘Thou shall not kill’ shirts spotted in Black Nazarene march 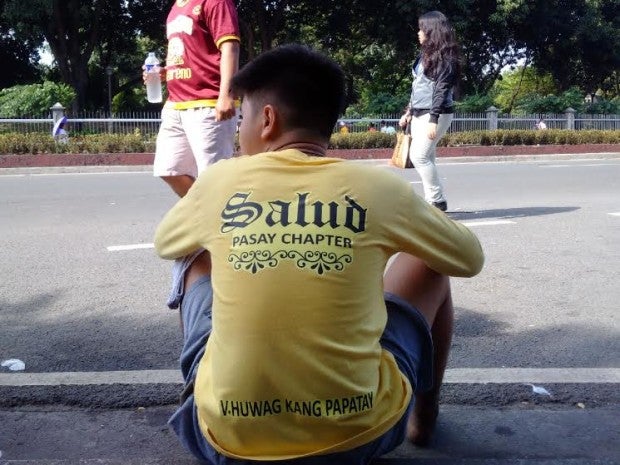 A participant in the Black Nazarene procession wears a “Thou Shall Not Kill” shirt on Jan. 9, 2017, to call on President Duterte to put a stop to drug-related killings. (PHOTO BY AIE BALAGTAS SEE/ INQUIRER)

MANILA — Some devotees of the Black Nazarene wore, on Monday, custom made shirts with God’s fifth commandment printed on the clothes: Huwag kang papatay (thou shall not kill).

“Patama to kay (President) Duterte para matigil na yong patayan (This is a verbal shot at Duterte so the killings will stop),” said 16-year-old Diether Edralin in an interview with the Philippine Daily Inquirer at the procession’s route on Padre Burgos.

Edralin is part of Pasay City’s Salud chapter and started joining the procession three years ago. For this year’s Black Nazarene feast, he said, their leader, a certain Jonnel, thought of coming up with such shirts last January 2.

“This is for everyone to see,” he said.

Edralin said some 30 members of their chapter members joined the procession on Monday.

They did not hear mass and arrived in Manila by foot about 6 a.m.

He said many of them had relatives who were killed recently.

“They will say nanlaban, nanlaban (they resisted, they resisted). Do you believe that?” he asked sarcastically while eating corn on the sidewalk.

“We think they’re innocent. Even our barangay chairman, who was kind to me, was shot dead,” he said.

Edralin identified the chairman as Alberto Arguelles, 48, chair of Barangay 4, Zone 2. He said men on motorcycle shot him recently. Edralin could not remember the date. 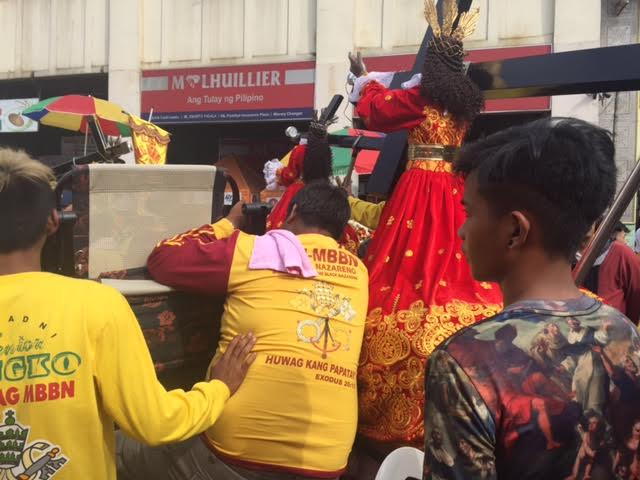 Some Black Nazarene devotees wear “Thou Shall Not Kill” shirts during the procession on Jan. 9, 2017, to urge President Duterte to stop the wave of drug-related killings in the country. (PHOTO BY AIE BALAGTAS SEE / INQUIRER)

A check of a local news report showed that Arguelles was shot dead along E. Rodriguez street last July by motorcycle-riding men who left a placard calling him a drug peddler.

The reason why Edralin joined the procession, however, was not political. He said he believed the Black Nazarene to be miraculous and he wanted miracles for his family.

“I want good health for them and I wish I could finish my studies because we are poor and we don’t have much money,’ he said.

Aside from Edralin, Quiapo Church’s alagad Norberto Pajarillo and Delpan’s Elmer Cruz also wore shirts with the same commandment printed at the back of the shirts, close to the hemlines.

Pajarillo said this was in line with the Quiapo church’s recent stand on national issues.

“Last year, we wore shirts with the commandment thou shall not steal,” Pajarillo said in a separate interview on Carlos Palanca street.

Pajarillo, 70, has been with the Quiapo basilica for 40 years. Like other watchmen or alagad, they were tasked to ensure the “safety” of the Nazarene.

Cruz said their group members wore such shirts in line with Cardinal Luis Antonio Tagle’s reminder that one should not kill.

“Look at what’s happening now,” Cruz explained when asked by the INQUIRER what Tagle’s message meant to him. “The cardinal wants the beloved President to correct what’s happening right now because there’s a lot of crime.”  SFM 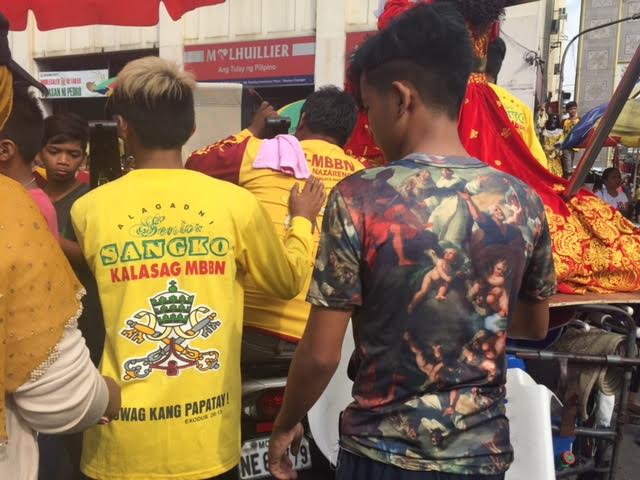 Black Nazarene participants put on “Thou Shall Not Kill” shirts to remind the public and President Duterte that the wave of killings in the war on drugs is not right. (PHOTO BY AIE BALAGTAS SEE / INQUIRER)

Read Next
US West Coast prepares for flooding while East in deep freeze
EDITORS' PICK
Smart offers wireless fiber-like speeds to Filipino homes with country’s first 5G Prepaid Home WiFi
Holidays made best with Acer’s ‘Holidays at Home’ raffle promo
BIR audits tax compliance of Pharmally
Corruption in PH: Where presidential aspirants stand
Pharmally’s Twinkle Dargani in tears when asked about missing documents
Two more sites at Robinsons Malls for temporary offsite passport services
MOST READ
Roque ‘hurt’ after presidential aspirant did not adopt him in Senate lineup
Pharmally’s Twinkle Dargani in tears when asked about missing documents
Gordon says Rose Nono Lin is husband’s dummy, but she denies senator’s accusations
Gordon to Duterte: ‘How dare you ask for Filipinos’ vote when you failed them?’
Don't miss out on the latest news and information.