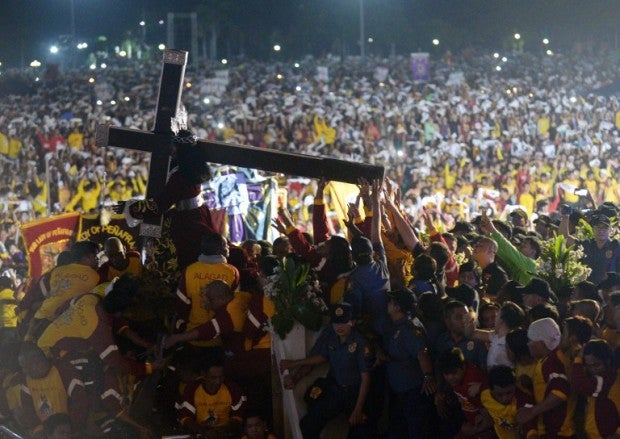 Masses of barefooted devotees gathered in Manila on Monday in a bid to touch a centuries-old icon of Jesus Christ, a frenzied annual event that is one of the world’s biggest displays of Catholic devotion.

The life-sized statue is believed by many in Asia’s bastion of Catholicism to have miraculous powers, and more than one million people converged around the procession’s path last year when two people died in the crush.

Devotees attempt to get close enough to the statue as it is paraded on a carriage, then climb on each others’ shoulders to kiss the icon or wipe it with white towels.

Others fight to touch thick lengths of rope that the pilgrims use to pull the statue’s carriage, which passes slowly along Manila’s streets throughout the day before returning to its home in the historic Quiapo church.

Many walk Manila’s hot concrete streets without shoes as a sign of penance and to imitate Jesus carrying the cross barefooted before he was crucified.

The statue is called the Black Nazarene, given its name because of its charred color that is believed to have occurred when it survived a fire aboard a ship when being brought to the Philippines from Mexico in the early 1600s.

Such extreme forms of worship are a hallmark of the Philippines which is 80 percent Roman Catholic, a legacy of centuries of Spanish colonialism that ended in 1898.

President Rodrigo Duterte, who often gives conflicting signals about his religious convictions and criticizes the Church’s leaders, nevertheless offered encouragement to those involved in Monday’s procession.

“Prayers are likely answered because we do not give up or get tired from asking God for the fulfillment of our heart’s desires,” Duterte said.

“Such is the phenomenal expression of faith of the millions of devotees in the form of gratitude, petition, and sacrifice shown in the image of the Black Nazarene every feast day on the 9th of January every year.”

This year’s event is being held under the threat of Islamic militant attacks, with authorities reporting more than 5,700 police  deployed to provide security.

Police chief Ronald dela Rosa has said repeatedly in recent days that extremists who have pledged allegiance to the Islamic State of Iraq and Syria (ISIS) group may try to stage a terrorist attack.

The Philippines has a Muslim minority that is mainly based in the south of the country and has long resented the Catholic domination of their ancestral homelands.

A separatist rebellion in the south has claimed more than 120,000 lives since the 1970s.

The major rebel organizations are now involved in peace talks with the government and no longer waging armed conflict.

But there are various small hardline groups that continue to carry out attacks, particularly against Catholics.

The most recent deadly attack was a bomb blast at a crowded market in Duterte’s hometown of Davao in September last year that killed 15 people.

As part of security measures for the festival, police raided an Islamic center in the heart of Manila on Saturday although they only arrested two people who were found with illegal drugs, police said.

Nevertheless Dela Rosa encouraged devotees to not be cowed by the security threats.

“Our message to the millions of Black Nazarene devotees: don’t be afraid. God is with us,” he said. CBB/rga