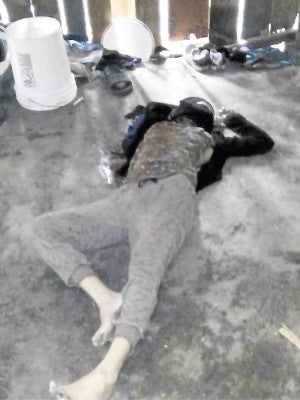 The operation to arrest foreign terror suspect Abu Naila led to his death and that of his wife, Kadija, whose body lies in the middle of a shack they were hiding in. —CONTRIBUTED PHOTO

KORONADAL CITY—Police had turned over the bodies of a terror suspect and his wife who were killed at a raid on Saturday, leaving behind more unanswered questions about the extent of influence of international terror organizations on local armed crime groups operating in mostly Moro areas.

Senior Insp. Canieso Wanigon Golwingon, police chief of Maasim town in Sarangani province, said the remains of the terror suspect, identified as Abu Naila, and his wife, Kadija, had been turned over to officials of a village in Maasim.

Golwingon said while Naila’s nationality could not be determined yet, the slain suspect is tagged as a bomb expert of the Ansar Al-Khilafah, an emerging international terror organization that is claiming to have affiliates worldwide, including in the Philippines which calls itself Ansar Al-Khilafah Philippines (AKP).

Members of the group’s branch in Mindanao, Khalifa Islamiyah Mindanao, are believed to have received bomb-making training from Indonesian and Malaysian terrorists, like Marwan.

Maguid, also known as “Tokboy,” headed AKP before his death during a clash with police in Kiamba town on
Jan. 5.

“We turned over the remains and they were buried already,” said Golwingon of the bodies of Naila and Kadija.

“Nobody really knows them in the area,” he said. He added that the couple were to travel to Sulu from the Lanao provinces but aborted their plan “due to heightened border patrols.”

Police were out to arrest the two but claimed they were fired upon.

The influence of the Islamic State of Iraq and Syria (IS) on local terror groups could be gleaned from what authorities found during raids on the hideouts of Maguid and his followers, who are main suspects in the grenade attack in Maasim town last year that killed a police officer and wounded dozens.

The military had tagged Maguid as an IS supporter.

During a clash in Palimbang, Sultan Kudarat, between soldiers and Maguid’s group in November 2015, eight men, including an Indonesian national, had been killed. —JEOFFREY MAITEM WITH WIRES