Pope: Help those living on street in cold and indifference 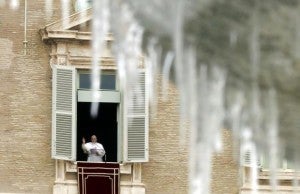 Pope Francis, framed by icicles hanging from a frozen fountain, delivers his blessing during the Angelus noon prayer he celebrated from the window of his studio overlooking St. Peter’s Square, at the Vatican, Sunday, Jan. 8, 2017. (Photo by ANDREW MEDICHINI/AP)

In Italy alone, eight deaths were blamed on the cold, including a man who died in the basement of an unused building in Milan, and another on a street flanking Florence’s Arno River. Francis prayed for those who “unfortunately didn’t” survive the cold. He also asked God to “warm our hearts so we’ll help” the homeless.

The Vatican has distributed to some homeless thermal sleeping bags that protect down to minus 20°C (-4°F). Some Vatican vehicles, their doors unlocked, were left at night outside the Vatican City’s high walls, so homeless people could take turns going inside the cars to warm up. Several homeless sleep outside, under Vatican porticoes.