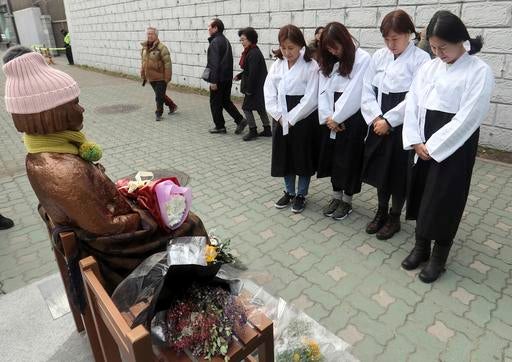 South Korean women wearing traditional dress pay theirs respects to a “comfort-woman” statue set up in front of the Japanese consulate in Busan, South Korea, Friday, Jan. 6, 2017. Japan announced Friday that it would recall its ambassador to South Korea and suspend economic talks in response to the placing of a “comfort-woman” statue representing wartime sex slaves in front of its consulate in the Korean port city of Busan. (Kim Sun-ho/Yonhap via AP)

SEOUL, South Korea — A South Korean Buddhist monk is in critical condition after setting himself on fire to protest the country’s settlement with Japan on compensation for wartime sex slaves, officials said Sunday.

The 64-year-old monk suffered third-degree burns across his body and serious damage to vital organs. He’s unconscious and unable to breathe on his own, said an official from the Seoul National University Hospital, who didn’t want to be named citing office rules.

The man set himself ablaze late Saturday during a large rally in Seoul calling for the ouster of impeached President Park Geun-hye, police said. In his notebook, the man called Park a “traitor” over her government’s 2015 agreement with Japan that sought to settle a long-standing row over South Korean women who were forced into sexual slavery by Japan’s World War II military, police said.

Under the agreement, Japan pledged to fund a Seoul-based foundation that was set up to help support the victims. South Korea, in exchange, vowed to refrain from criticizing Japan over the issue and try to resolve the Japanese grievance over a bronze statue representing wartime sex slaves in front of its embassy in Seoul.

The agreement has so far come short of bringing a closure to the emotional issue. The deal continues to be criticized in South Korea because it was reached without approval from victims, and students have been holding sit-in protests next to the Seoul statue for more than a year over fears that the government might try to remove it.

On Friday, the Japanese government reacted angrily to the placing of a similar statue in front of its consulate in the city of Busan, announcing the recall of its ambassador to South Korea and suspension of economic talks.

“The South Korean side should show its sincerity,” he said in a NHK TV program aired Sunday, according to Kyodo News service. He said the agreement should be implemented regardless of leadership change as a “matter of credibility.”

At the time of the deal, Seoul said there were 46 surviving South Korean victims./rga