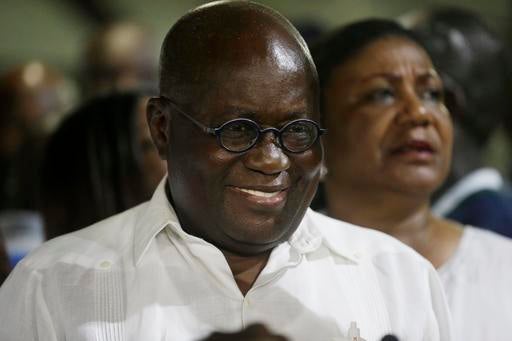 Ghana President elect Nana Akufo-Addo, of the New Patriotic Party, smiles on being declared the winner of the presidential election in Accra, Ghana, Friday, Dec. 9, 2016. Ghana’s longtime opposition leader Nana Akufo-Addo won the presidency late Friday on his third run for the office, a race that was largely seen as a referendum on how the incumbent party had managed the economy in this long stable democracy. AP

ACCRA, Ghana — Ghana’s chief justice swore in the nation’s newly elected President Nana Akufo-Addo amid a sea of people dressed in the red, blue and white colors of his party.

Akufo-Addo, 72, won the Dec. 7 election on his third run for the office, defeating incumbent John Dramani Mahama. The race was largely seen as a referendum on how the incumbent party had managed the economy in this long stable democracy.

This is the fourth time a Ghanaian president has peacefully stepped aside to make way for a newly elected leader, after the country suffered more than a decade of military dictatorship.

The ceremony was attended by a number of African leaders, who will meet to discuss Gambia’s political crisis.TVJ