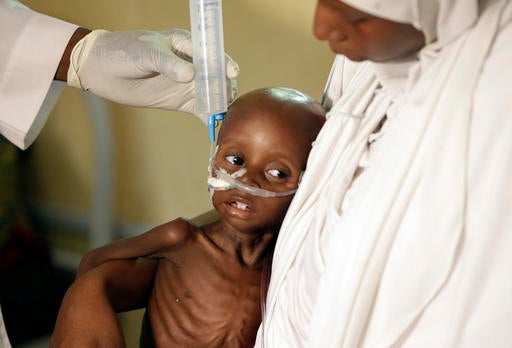 In this Aug. 29, 2016, file photo, a doctor feeds a malnourished child at a feeding centre run by Doctors Without Borders in Maiduguri, Nigeria. AP

A statement Saturday says people are “in desperate need” and other organizations are not stepping up.

U.N. agencies and private charities operate in Maiduguri city alongside government agencies being investigated for corruption in food distribution. Refugees have almost doubled the population of Maiduguri, the birthplace of Boko Haram, to 2.5 million.

It warns many more could die in famine than the 20,000-plus killed in the seven-year Islamic uprising. TVJ