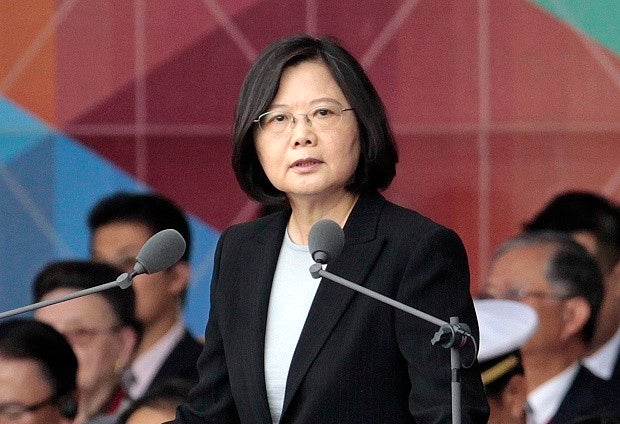 In this Oct. 10, 2016 file photo, Taiwan’s President Tsai Ing-wen delivers a speech during National Day celebrations in front of the Presidential Building in Taipei, Taiwan. Taiwan’s president will transit through Houston and San Francisco next month while traveling to Central America, stops that will likely irritate Beijing, which has urged Washington to prevent the self-ruled island’s leader from landing in the United States. AP FILE PHOTO

BEIJING — Taiwanese President Tsai Ing-wen has set off to visit Central American allies, saying she wants to bolster Taiwan’s presence on the international stage on a trip that includes transits in the US that look set to raise China’s ire.

Speaking to reporters before boarding her flight Saturday, Tsai said the visits would bolster relations with Taipei’s allies and “show the international society that Taiwan is a capable and responsible partner for cooperation.”

She will transit through Houston and San Francisco, stops that will likely irritate Beijing, which has urged Washington to prevent the self-ruled island’s leader from stopping in the US

It was not clear if Tsai would meet President-elect Donald Trump or anyone from his transition team, though analysts say she is likely to meet with US politicians.