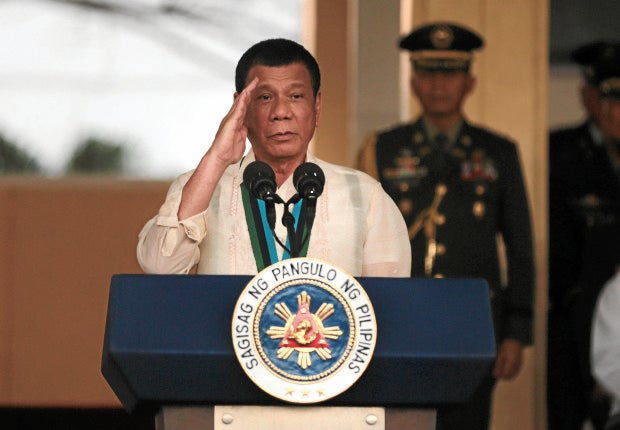 President Rodrigo Duterte’s approval and trust ratings, both at 83 percent, remained high during the last quarter of 2016, according to the latest Pulse Asia survey.

“Amidst various controversies involving him and his administration, most Filipinos remain appreciative of the work done by President Rodrigo R. Duterte,” the survey firm said in a release.

Among the events that unfolded before and during the survey period were the resignation of Vice President Ma. Leonor “Leni” Robredo, the Supreme Court decision dismissing petitions opposing the burial of former President Ferdinand Marcos at the Libingan ng mga Bayani and the Senate and National Bureau of Investigation probe into  the killing of Albuera, Leyte Mayor Rolando Espinosa Sr.

Duterte’s ratings were more or less the same from last September when he received 86 percent for both his performance and trustworthiness.

Of the respondents surveyed in December, five percent disapproved of Duterte while 13 percent were undecided. Only four percent said they did not trust the President.

Among geographic areas, which have a ± 6% error margin, the President received the highest ratings from Mindanao (91 percent approval, 92 percent trust). This was followed by Visayas with an approval rating of 88 percent and trust rating of 86 percent.

Eighty-one percent of respondents from the National Capital Region said they trust Duterte. Eighty percent said they approve of him. His ratings in the rest of Luzon are slightly higher with 84 percent expressing approval and 82 percent saying they trust him.

Of the socioeconomic classes, Duterte received the highest rating from Class E respondents at 88 percent. RAM/rga 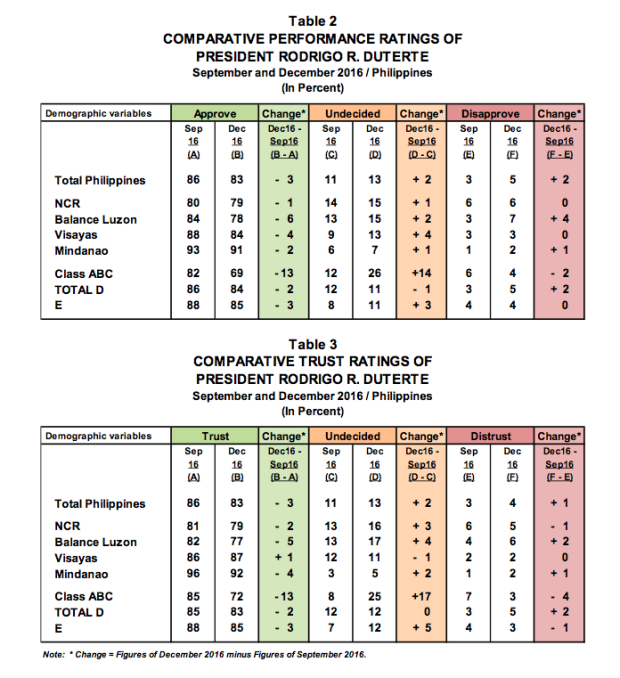 Palace thanks nation for ‘very good’ rating for Duterte