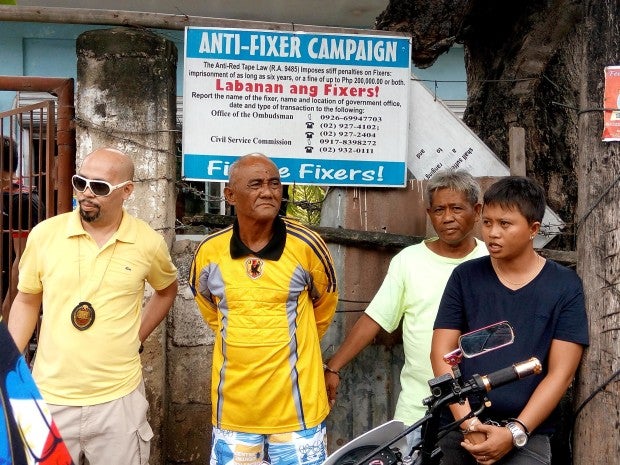 Three alleged fixers at the Land Transportation Office (LTO) in Tagbilaran City are arrested on Jan. 5, 2017, by the agents of National Bureau of Investigation (NBI)-Bohol. They are identified (from second from left) as Glenn Salvacion, Fide Salvacion and their niece, Rosemarie Cagas. (PHOTO BY LEO UDTOHAN / INQUIRER VISAYAS)

TAGBILARAN CITY, Bohol — Three suspected license “fixers” at the Land Transportation Office (LTO) were arrested during an entrapment operation by the National Bureau of Investigation here on Thursday in this city.

Lawyer Rennan Augustus Oliva, head of the National Bureau of Investigation (NBI)-Bohol, identified the suspects as Glenn Salvacion, 48, and his brother, Fide, 51, and their niece Rosemarie Cagas, 30.

The three were arrested in an entrapment operation conducted by the NBI agents who acted as students who wanted to secure non-professional licenses.

The undercover agents were at the LTO office about 11 a.m. on Thursday when the Salvacion brothers and Cagas approached them.

The suspects identified themselves as “LTO canvassers” and asked for P500 in service fee.

After the three were “hired,” they accompanied the undercover agents in securing their licenses, which were completed in less than an hour.

After the process was finished, the three were then arrested. Recovered from them were the marked money and LTO receipts.

Lawyer Arcelito Albao, supervising agent of NBI-Bohol, said their office had been receiving complaints against the suspects from LTO employees and victims with legitimate transactions in the agency.

He said at least 30 fixers at LTO were loitering the area.

One of the complainants, Remedios Salvacion, 60, a resident of San Miguel town, admitted that she had transacted with the fixers to get her a license to operate for her tricycle and paid P4,000 but the fixers didn’t deliver what they promised.

“The fixer promised me that my license to operate would be released in a week. It has been three years and I still have yet to get my license,” she added.  SFM