110 still on run after jailbreak in North Cotabato 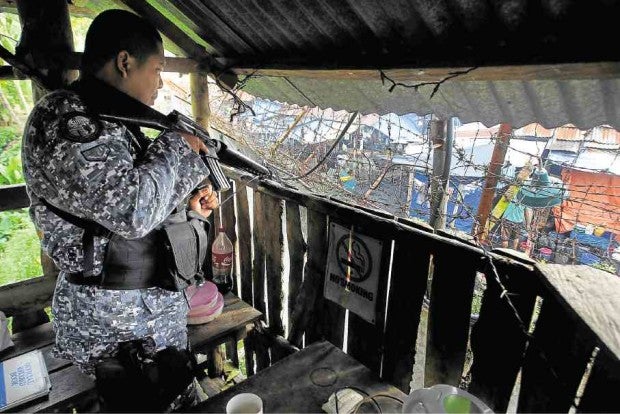 A prison guard watches over the compound of the North Cotabato District Jail in Kidapawan City following the escape of more than 150 inmates on Wednesday morning. —REUTERS

KIDAPAWAN CITY—At least 34 inmates who escaped in the country’s biggest jailbreak had been rearrested but more than 110 remained on the run in vast farmlands and isolated villages in North Cotabato province, authorities said.

Suspected Moro rebels stormed a decrepit jail in this city early Wednesday, freeing 158 inmates and killing a guard, in what authorities said was a bid to free fellow rebels.

A village official, who allegedly drew a gun when encountered by policemen, also was killed.  But the official’s wife denied that her husband was part of the attackers or that he aided the escape.

Jail authorities said there were many obstacles in the manhunt. “This is a very wide area. Aside from sugar, rubber and coconut plantations, there are areas and camps held by rebels that we cannot easily enter,” Supt. Peter Bongngat, the jail warden, told Agence France-Presse (AFP).

The overcrowded North Cotabato District Jail here held rebels from various groups as well as members of criminal gangs. The jail, which housed at least 1,500 inmates, is a run-down former school building that militants have targeted repeatedly over the past 15 years.

Sueño defended the BJMP officials despite their failure to appropriately act on the information they received and to deploy additional jail guards to prevent the mass escape.

“The area behind the jail is forested that’s why they did not see them (attackers). But the attackers were not able to get close to the jail,” Sueño told reporters in a news briefing in Malacañang on Thursday.

Asked why the jail guards failed to thwart the attack even after receiving a warning, he said: “It’s because we did not know when it will actually take place.”

Bongngat said they never let their guard down, although the police and soldiers who helped boost prison security in anticipation of a Dec. 31 attack, were made to return to their units when the attack did not happen on that day.

“There was no pullout,” said Bongngat, who admitted they were alerted about the attack three months earlier. “Let us be clear on what had transpired here. There was no permanent augmentation from the police or military so we cannot say that there was a pullout,” he said.

“When the augmentation forces left, there were about 20 jail guards under the BJMP securing the prison,” he added.

Kidapawan Mayor Joseph Evangelista has called for a special investigation into the killing of Patadon village councilor Satar Manalundong at the height of the manhunt for the fugitives.

Evangelista said Manalundong had provided him information on an impending raid at the jail as early as last month.

“It was him who told me that a [jail] rescue was being planned by armed men and would be carried out on Dec. 31,” the mayor said.

The raid by suspected followers of Esmael Nasser, alias Derbi, did not materialize until four days later.

Evangelista said he was in constant communication with Manalundong during the manhunt, who he said had been giving him accurate information.

Manalundong was shot and killed by personnel of the police’s Special Action Force (SAF) near a mosque as he was approaching them on a motorcycle at 7 a.m. Wednesday, his wife Haydeelyn Demalen, said.

Haydeelyn said her husband, who was unarmed, wanted to talk to the SAF members.