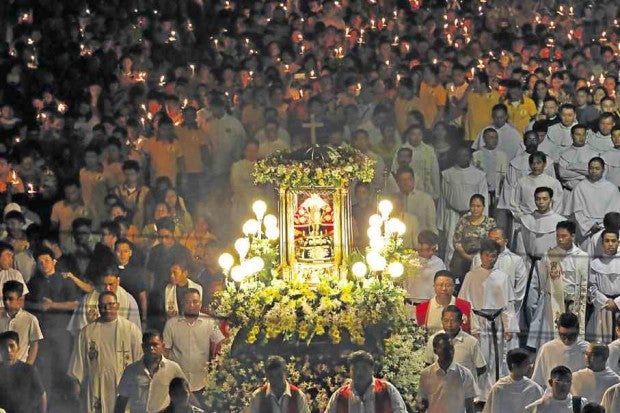 Devotees, among them tourists, join the image of the Holy Child Jesus in a dawn procession on Thursday to start this year’s Fiesta Señor. —JUNJIE MENDOZA/CEBU DAILY NEWS

CEBU CITY—Security concerns failed to dissuade at least 40,000 devotees from attending the dawn procession that officially opened this year’s Fiesta Señor—Cebu’s feast in honor of the Holy Child Jesus.

At least 240 policemen, members of the Special Weapons and Tactics (SWAT) and traffic enforcers guarded the 2-kilometer route, as devotees braved a wet, chilly dawn to bring the image of the Holy Child Jesus from the Fuente Osmeña rotunda to the Basilica Minore del Sto. Niño for the 4:30 a.m. annual “Walk with Jesus” and the first novena Mass.

Young and old devotees carried their own images of the Sto. Niño, recited the holy rosary, and sang liturgical hymns which were broadcast live on radio and amplified by speakers.

There were no fireworks or balloons along the route of the procession following earlier appeals by Augustinian priests in charge of the basilica to maintain the solemnity of the event and ensure public safety.

The flower-decked carroza that carried the image of the Sto. Niño arrived at the basilica at 5:45 a.m.

Devotees shouted, “Viva! Pit Señor!” and waved their hands to the singing of the “Gozos of Señor Sto. Niño” and tolling of basilica bells as the image of the child Jesus in royal garb arrived and was transferred from its carriage to a pedestal in the outdoor sanctuary.

The 3,500-capacity church courtyard was packed. Many had to stay in the streets outside the church to hear Mass, which was beamed on large LED screens and television monitors.

During the Mass that followed the walk, church leaders cited the faithful for their zest in participating in the opening event but challenged them to express their faith in the Child Jesus through concrete care for suffering children.

Fr. Pacifico Nohara Jr., basilica rector, noted the irony of the presence of many abandoned children in the streets in spite of Filipino Catholics’ strong devotion to the Sto. Niño.

“Those who truly care for them are the ones who truly love the Lord,” said the priest. “Take care of the children, especially the weak and the suffering.”

Last year, Social Welfare Secretary Judy Taguiwalo exhorted the public to help report cases of child abuse that the Department of Social Welfare and Development said was on the rise across the Philippines.

After the Mass, Nohara and other priests blessed images of the Sto. Niño that the faithful brought with them and led the crowd in the devotional dancing of the Sinulog to the tune of the percussion-laden “Pit Señor” by Cebuano singer-songwriter Manny Lapingcao, a prelude to the hourlong dance in the pilgrim center on the night of Jan. 14.

To accommodate throngs of devotees, the basilica will be open 24 hours a day starting Friday until the feast day on Jan. 15. Except on Jan. 13, when another dawn procession is scheduled, 11 Masses will be held at the outdoor pilgrim center every day leading to the feast of the Sto. Niño.