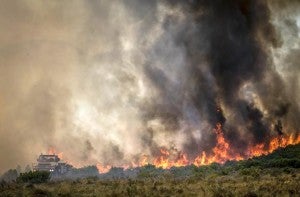 In this photo taken Wednesday, Jan. 4, 2017, a fire is fought in Somerset West near Cape Town, South Africa. Authorities say wildfires raging in South Africa’s wine region have destroyed part of one of the country’s oldest estates, while some slopes of Cape Town’s Table Mountain burned. (Photo by STEFAN SMUTS/AP)

JOHANNESBURG — Authorities say wildfires raging in South Africa’s wine region have destroyed part of one of the country’s oldest estates, while some mountain slopes in Cape Town burned.

City spokesman J.P. Smith said Thursday that firefighters worked through the night to try to contain 106 blazes in the area. He says no one has been killed.

Low rainfall, dry vegetation and strong winds create prime conditions for fires in the region in summer. Two years ago, a fire on Table Mountain lasted for nearly two weeks.

Farm manager Don Tooth says around 40 percent of the Vergelegen wine farm that was established by Dutch settlers in the 1700s has been destroyed by fire.

Read Next
Matobato indicted for slay try on agrarian reform officer
EDITORS' PICK
Is your company a growth champion? Stand up and be recognized!
Joe Biden sworn in as 46th U.S. president, urges end to ‘uncivil war’
PUP accord with DND also faces termination
4 senators want military, cops off UP campuses
Acer Philippines welcomes you to its first flagship store
New Year, New Rediscoveries
MOST READ
Trump’s parting gifts to Biden: Roaring stocks, a weaker dollar, tons of debt
Biden says Trump wrote him ‘very generous letter’
A shade at Roque? Vice asserts being a comedian, not a clown
Makati Shangri-La to close its doors temporarily starting Feb. 1
Don't miss out on the latest news and information.