Threats to Nazarene feast ‘always possible,’ but no info—police 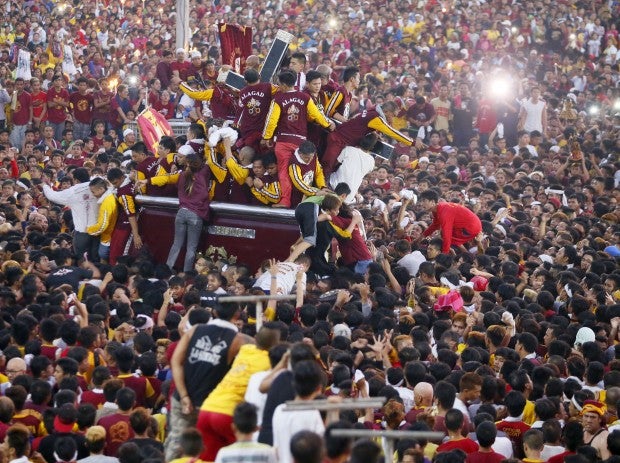 Tens of thousands of Catholic devotees jostle to get closer to the image of the Black Nazarene as they take part in a raucous procession to celebrate its feast day in Manila, Philippines, every year on Jan. 9 (Photo by BULLIT MARQUEZ/AP)

Citing previous incidents and foiled attempts of bombing in the country, Metro Manila police on Thursday said authorities are not discounting the possibility of threats against Monday’s Black Nazarene procession, which draws a mammoth crowd of devotees every year.

In a press briefing on security preparations for the Traslacion at Quiapo Church, National Capital Region Police Office (NCRPO) Chief Supt. Oscar Albayalde said the government’s security forces are on full alert status to prevent what he called a possible retaliation by threat groups from Mindanao amid military operations against them.

“Here in NCR, we have repeatedly said that we have maintained our high security threat level because of these ongoing offensives of the Armed Forces of the Philippines against threat groups from Mindanao. So just to avoid any spillover or any retaliatory acts from these threat groups, we maintain our high security threat level here in Metro Manila so we could also maintain our full alert status and our target hardening measures in all places of convergence, particularly in this activity,” Albayalde said.

Albayalde said Metro Manila is a usual target of threat groups because it is the seat of government. He cited the recovery of an improvised explosive device near the United States Embassy in Manila in November last year, and the Rizal Day bombings in Metro Manila in December 2000.

In Leyte, two explosions at a town plaza wounded 32 people in a fiesta on Dec. 28, 2016. Also last year, 15 people were killed and scores were wounded in the bombing of a night market in Davao City.

But the NCRPO chief maintained that the police have not received any intelligence information about any “imminent threat or any clear or present danger” to the Black Nazarene procession, which is expected to be attended by at least 15 million devotees.

“We know that there is this threat because there is this ongoing offensive from the AFP against these threat groups. Kaya the threat is there, but it is not clear, present, or imminent,” Albayalde said. “We cannot take this for granted, these security preparations natin, kasi meron na pong recovery of IEDs dito sa NCR.”

“So there is always a possibility of retaliatory acts from these threat groups particularly coming from Mindanao. If we have information, then it should be validated then meron po tayong clear and present danger siguro. But sabi ko nga po, wala po tayong nakukuhang information on that,” he added.

Earlier, the AFP said cellular phone signals will be jammed and the use of drones prohibited during the procession as part of security measures.

Albayalde said the NCRPO will deploy 4,190 policemen to the Traslacion, aside from 650 soldiers from the AFP.

The annual grand procession, the largest in the predominantly Catholic Philippines, commemorates the first parade transferring the revered statue of Jesus Christ from a church in Intramuros to the Quiapo Church on Jan. 9, 1767. JE/rga