KIDAPAWAN CITY—All was quiet at the North Cotabato District Jail here and the inmates appeared asleep.

In fact, they were anticipating a daring predawn raid on Wednesday to rescue members of the Bangsamoro Islamic Freedom Fighters (BIFF), according to Felix Capalla, one of the jail leaders.

At 12:30 a.m. black-uniformed men, some wearing balaclavas and armed with rocket-propelled grenade launchers and 50 cal. rifles, stormed the jail and sprang  158 prisoners in the biggest mass escape recorded so far in the country.

“The jail guards fought the armed raiders but were overpowered by the sheer number of attackers,” Capalla said. 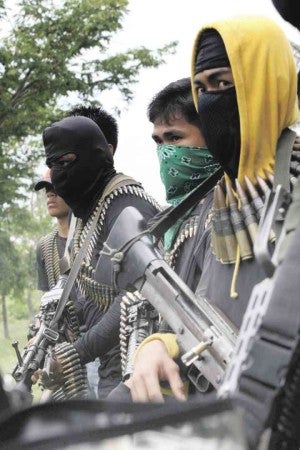 DARING RESCUE Members of the Bangsamoro Islamic Freedom Fighters, some of them shown in this 2012 photo, staged a daring raid on the North Cotabato District Jail in Kidapawan City before dawn on Wednesday, killing a guard and freeing 158 inmates. —JEOFFREY MAITEM

The men opened Cell Nos. 6 and 7, where high-profile inmates such as those accused of involvement in bomb attacks in the province and other parts of Central Mindanao were detained, he said.

Capalla said the attackers first rescued the Tamayan brothers and the Salik siblings, all alleged BIFF members. They then opened other cells and freed more inmates.

“They destroyed the padlocks,” Capalla said.

A total of 158 inmates fled under cover of darkness, according to Supt. Peter Bongngat, the warden.

Six escapees were later recaptured, including two who surrendered.

Solda said the raid was carried out by 100 men and that they were out to spring BIFF men charged with murder and drug trafficking.

“To my knowledge, this is the biggest jailbreak in the history of the bureau,” Solda said.

The President’s spokesperson, Ernesto Abella, appealed for “calm and sobriety” amid speculation that BIFF guerrillas were involved.

He said no specific information on the identity of the attackers had so far been received.

“We assure our people that manhunt operations on the escapees are now under way,” he said in a statement.

A civilian was also killed in the hunt for the escapees. He was identified as Satar Manalundong, a barangay councilman. He was allegedly shot by policemen who mistook him for an escapee.

“I lost one guard,” Bongngat said. The guard was identified as JO1 Excell Ray Vicedo.

Vicedo was manning the gates of the jail when the attackers, led by Esmael  Nasser, alias Commander Derbi, arrived. Vicedo was immediately shot dead.

Derbi was also an escapee from the same jail. He was detained on bombing charges and the killing of Kabacan Vice Mayor Policarpio Dulay in 2013. He and two other suspected BIFF members escaped in August last year.

Bongngat said Derbi and his men switched off the power to the entire jail while engaging other guards in a firefight.

Capalla said that before the attack, some of the 1,511 inmates in the 750-capacity jail  were already talking  about an impending rescue operation.

“I started hearing the plot before New Year’s Day. Word had been spreading that inmates of Cell No. 8 will be rescued. But prior to that, some inmates also told us to be ready,” Capalla said.

He said he informed Bongngat about the planned attack.

Capalla said Bongngat immediately asked for reinforcement and policemen were deployed to the jail.

But on Jan. 2, he said the policemen disappeared and only BJMP personnel were left to secure the jail.

“It was well planned,” Bongngat said.

A report by the regional police office quoted one of the recaptured inmates, Jason Angkanan, as saying he noticed that their cell was not yet padlocked when he went to sleep at 10 p.m. on Tuesday.

He said he was awakened by gunfire at 1 a.m. and then heard some inmates shouting that they should go out of the jail because the attackers would burn the building.

He said he joined the others in scaling the wall.

Angkanan was arrested by village watchmen at the nearby Central Mindanao Institute and Research Center around 2 a.m. and later turned over to the military.

Abu Misri Mama, the BIFF spokesperson, told the Inquirer: “We have other priority targets. And if ever we do conduct operations, we would never deny responsibility.”

Interior Secretary Ismael Sueno directed the BJMP to intensify the hunt for the remaining escapees.

Sueno also expressed grief over the death of Vicedo. “We are deeply saddened by the loss of one valiant comrade who offered his life in the fulfillment of his avowed duty. He and the other jail wardens on duty held on to their post amid the havoc, the true mark of a public servant.” —WITH REPORTS FROM EDWIN FERNANDEZ, JEOFFREY MAITEM AND KARLOS MANLUPIG IN MINDANAO; JEROME ANING, MARLON RAMOS AND CYNTHIA D. BALANA IN MANILA; AP AND AFP