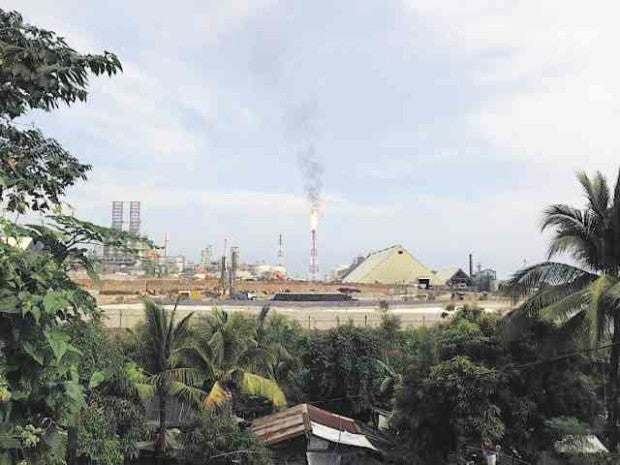 Ash gathering at the bottom of the chimney of this coal-fired power plant in Limay, Bataan, earned the Petron Bataan Refinery its first notice of violation from the government. —TONETTE T. OREJAS

CITY OF SAN FERNANDO— The company operating the largest and most modern oil refining and petrochemical complex in the country began cleaning up the coastline of Limay town in Bataan province after tons of ash were emitted from a coal-fired power plant inside its refinery.

Work crews of the Petron Bataan Refinery undertook remediation measures, among them removing the bottom ash and cleaning up the coastlines, to comply with orders issued by the Environmental Management Bureau (EMB) in Central Luzon.

The refinery has been hosting the 150-megawatt plant which the San Miguel Consolidated Power Corp. has been running for three years. San Miguel Corp. (SMC) has controlling shares in Petron Corp.

EMB issued Petron a notice of violation on Dec. 28 after it found that bottom ash used as filling material within the facility was “hazardous.” Bottom ash accumulates at the base of the plant’s chimney, producing 15 to 20 truckloads of the material each day.

Lormelyn Claudio, EMB director in Central Luzon, directed the Petron refinery to “ensure adequate containment of bottom ash to avoid dispersion and draining of the same into nearby water bodies.”

The refinery was also required to present EMB with “an action plan specifying alternatives for the treatment and disposal of bottom ash and the rehabilitation of the affected nearby water bodies, such as a river.”

Claudio urged the refinery to “engage the services of licensed treatment and disposal facility for the hauling, transport and disposal of newly generated bottom ash.”

She warned the firm against draining bottom ash into a nearby river that would violate the Clean Water Act of 2004 (Republic Act No. 9275), the Toxic Substances and Hazardous and Nuclear Waste Control Act of 1990 (RA No. 6969) and the Philippine Environmental Impact Statement System (Presidential Decree No. 1586).

Refinery workers have dumped new bottom ash at the facility compound that stretches between the villages of Alangan and Lamao, according to a report received by Claudio.

SMC is constructing another coal-fired power plant that would generate 600 MW, and a 27.6-hectare ash storage facility, according to a copy of its environmental and social impact assessment report.

The hauling and disposal of bottom ash are being monitored by a team from the local government and a fishermen association.

Claudio said the refinery’s environment manager had submitted to EMB a design for a retaining wall around the plant’s existing ash storage dike. She said bottom ash should be treated at the site.

The EMB has been monitoring the drinking water from wells, the ground soil and water bodies near the refinery after bunker oil leaked from a pipeline that was accidentally punctured by a construction crew in July 2016.

Ethanol, an additive in gasoline, also spilled out of the pipelines in 2016.

Samples from six sites taken on Nov. 16 and 22 last year showed oil and grease in the area exceeded standards. The local government was advised to ration water in the villages of Wawa, Villa Leonora and Lamao as a precaution.  —TONETTE OREJAS