Palace appeals for calm after attack on North Cotabato jail

“We appeal for calm and sobriety,” presidential spokesperson Ernesto Abella said in a statement on Wednesday afternoon.

Police have accused the Bangsamoro Islamic Freedom Fighters, a breakaway group from the Moro Islamic Liberation Front, of pulling the jailbreak. 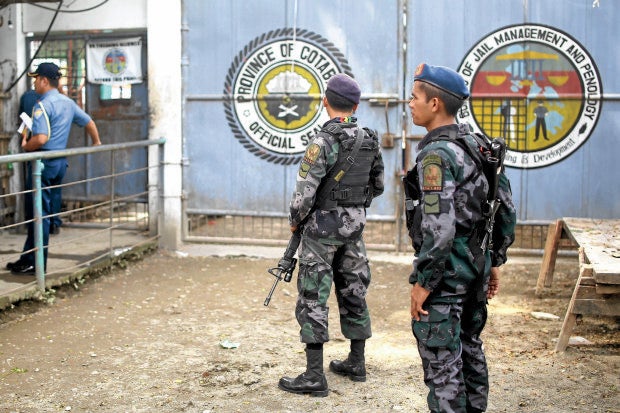 The Palace official said the Philippine National Police (PNP) and the Armed Forces of the Philippines (AFP) were “working closely to capture the escapees.”

“We assure our people that manhunt operations on the escapees are now underway as BJMP (Bureau of Jail Management and Penology) units in Region 12 and nearby provinces are on heightened alert,” he said.

Meanwhile, local authorities investigating the jail break said on Wednesday that five of the 158 escapees were killed during pursuit operations while eight others had either been recaptured or had surrendered.

Recaptured were Jason Angkunan, Wennie Rota Koremo, Faisal Tiburon, Joselito Tomines and Jerome Oguit. They were supposed to be heading toward Matalam town in North Cotabato when intercepted near the North Cotabato District Jail.

Felix Capalla, one of the jail inmate leaders, said the inmates, the jail guards and the local police have been warned of an impending attack and jailbreak.  He said policemen were deployed at the jail before New Year but were pulled out on Jan. 2, 2017. With a report from Carlo Agamon, Inquirer Mindanao