Small fishermen lose out in fight for fishing areas

CARDONA, RIZAL—The waters of Laguna de Bay have sustained the livelihood of small fishermen in Rizal and Laguna provinces and in Metro Manila for generations.

But as the lake attracted investors in the aquaculture industry, small fishermen have been slowly pushed to the margins, many of them ending up confined to fishing grounds that yield barely enough to feed their families.

A 1982 report by the Food and Agriculture Organization (FAO) of the United Nations described aquaculture as a “high-risk” venture.

The report said aquaculture was constantly threatened by natural calamities such as typhoons and fish kills.

“I know a lot of friends who had lost their savings [to milkfish (bangus) aquaculture],” said Mel Felix, head of the Association of Laguna Lake Fish Producers (ALLFP).

The Laguna Lake Development Authority (LLDA) would grant amnesty to operators whose fish pens were washed away by typhoons by extending for a couple of months the deadline to settle their fees, Felix said.

But others resorted to selling their “rights” to new owners in order to recover their money.

The agency allows such transactions, though this is where the problem comes in.

In many cases, the so-called transfer of rights was being done “without our knowledge,” said Maureen Tolentino, LLDA information officer.

The LLDA also has no way of determining whether fish pens are monopolized by a small group of businessmen through dummy corporations, as the agency relies only on documents being submitted by operators.

“It’s done through internal arrangements,” Felix said. “There’s no deed of sale or anything, just passing on the paper (permit) from one hand to another.”

How much rights are sold varies, depending on the location of the fish pens in the lake.

“If we are talking about water only, which means selling the space but without any structure, it may cost somewhere between P800,000 and P1.5 million for 50 hectares,” Felix said.

President Duterte was not the first government official to call attention to the “unsightly” structures dotting the Laguna de Bay.

In 2007, then Environment Secretary Lito Atienza pushed for the demolition of the fish pens.

After Tropical Storm “Ondoy” (international name: Ketsana) in 2009, Atienza called for the abolition of the LLDA, which he blamed for the proliferation of fish pens that caused the massive flooding in the provinces of Laguna and Rizal and parts of Metro Manila.

The LLDA, created in 1966 through Republic Act No. 4850, is the sole agency tasked with overseeing the lake and regulating fish pen operations. It is administratively supervised by the Department of Environment and Natural Resources (DENR), whose current head, Gina Lopez, also serves as chair of the LLDA board.

“To blame the LLDA [for the proliferation of fish pens] is not really the whole picture,” said Nereus Acosta, LLDA general manager.

He said some operators had been “delinquent” in paying government fees, while others had “overstretched” their structures.

The agency, he said, does not have all the “policing facilities” to cover the entire Laguna de Bay. 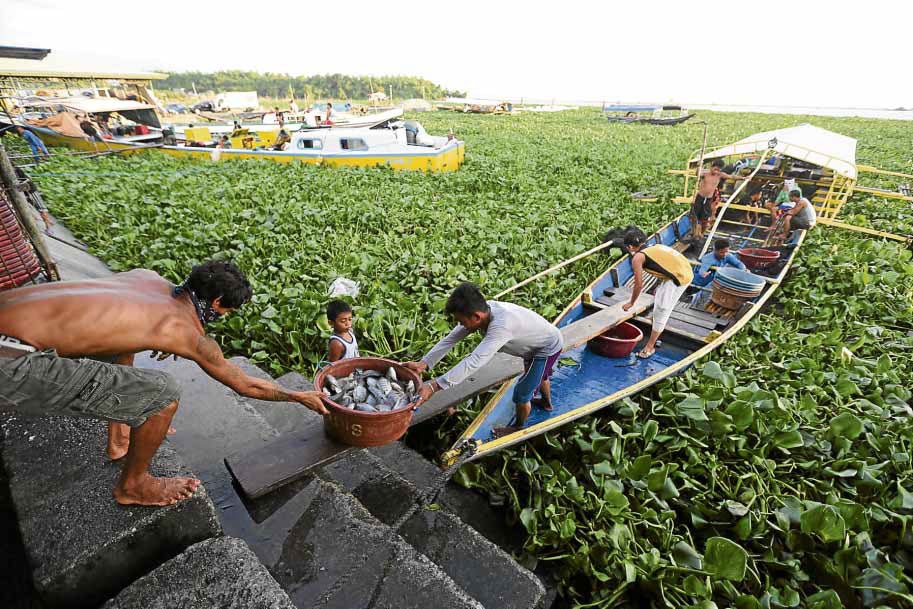 FISH HAUL Fishermen bring their catch from the Laguna de Bay to the fish port in Binangonan, Rizal province, for delivery to different markets. The lake produces 400,000 metric tons of milkfish and tilapia, supplying 70 percent of the fish needs of Luzon and parts of the Visayas. —REM ZAMORA

From 2010 to June 2016, the LLDA demolished illegal structures, clearing 1,823.57 ha of the surface water. These structures were abandoned or whose operations were considered illegal or delinquent.

For every demolition, the LLDA spends P65,000 a day to rent motorboats and hire laborers. The agency does not own a single motorboat.

The lake annually produces 400,000 metric tons of milkfish (Chanos chanos) and tilapia. It supplies 70 percent of the fish requirements of Luzon and parts of the Visayas, aside from various marine products caught in open waters, government records showed.

“Life would be good living by the lake if only (resources) are shared with the small fishermen,” said Rommy Antazo, a 70-year-old fisherman from Barangay Ticulio in Cardona, Rizal.

He still sails out to fish using pante (gill nets), a skill he acquired as a boy.

“In the 1960s, you need to spend only three hours fishing and you come home with food enough for three days,” Antazo said.

According to a 1987 report by the Southeast Asian Fisheries Development Center (Seafdec), the proliferation of commercial fish pens had adversely affected the yield of local fishermen.

“What the introduction of fish pens did was rob the municipal fishermen of their traditional catch by limiting both the area where they can fish and the volume of wild species that thrived in the lake,” the report said.

Local fishermen asserted their rights over the fishing ground that, according to a 2005 report by the LLDA, this led to some “serious conflict” between them and fish pen operators. Some fishermen were killed in the ensuing feud, the report said.

“Fish pen operators, particularly the bigger ones, employed armed goons,” a Cardona fisherman said. “They would fire at us or ram our boats when we came close to their pens.”

As a form of revenge, some fishermen would steal fish by cutting open the pens’ underwater nets to let the milkfish swim out.

“If you think about it, there shouldn’t be poverty around the Laguna Lake because it’s too big,” said environmental lawyer Ipat Luna, OIC (officer in charge) undersecretary for legal affairs of the DENR.

“But [resources] are not spread out and the owners are not the poor fisherfolk,” she said.

Acosta clarified that the LLDA was not imposing a “zero fish pen” policy, as that would lead to serious implications on national food security.

“To clean up the lake doesn’t mean to wipe [the fish pens] out. It’s not like sweeping the floor,” he said.

“The President wants it to be a lot more egalitarian. We should allow only small-scale fishing in the lake,” he said.

In September last year, the DENR and the LLDA drew up a six-year rapid rehabilitation plan to “democratize” the lake resources by gradually kicking out big investors to prioritize marginalized fishermen organizations and cooperatives, Luna said.

This amount is “beyond the reach of small fishermen [hence] the opportunity is usually taken by those who have the capital and access to technical know-how,” the FAO said.