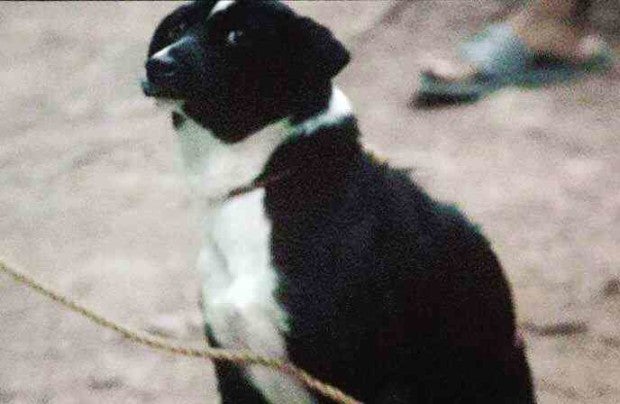 BEFORE THE SLAUGHTER Many hearts bled for this poor, furry extra in one of the movies that competed in the 42nd Metro Manila Film Festival. —screenshot by Anna Cabrera, paws executive director

The Metro Manila Film Fest (MMFF) executive committee on Tuesday took back the award received by the movie “Oro” as controversy swirled over a scene showing the slaughter of a dog.

“Upon consultation with the family of the late Fernando Poe Jr., the Metro Manila Film Fest Executive Committee announced the withdrawal of the Fernando Poe Jr. Memorial Award recently granted to the film ‘Oro,’” the execom said in a statement.

It added that “[w]ithout making any judgment on the artistic merit of the film or cinematic depiction, the MMFF finds the present controversy on the alleged killing of a dog in the course of the filming of the movie effectively casts a doubt on the movie’s ability to exemplify the human and cultural values espoused by the late Fernando Poe Jr.”

“Oro,” one of the eight official entries in the MFF, is inspired by a massacre in 2014 in which four small-scale miners—Jessie Brondia, Julio and Rene Labiano and Salem Virtuz—were killed by members of a group calling itself Sagip Kalikasan Task Force in Barangay Gata, Camarines Sur.

Liza Diño, chair of the Film Development Council of the Philippines, said there was no need to revoke the best actress award received by Irma Adlawan and Best Ensemble award given to the film.

“Those awards are based on individual efforts of the artists in making the film. I think it would be unfair,” Diño told reporters.

The Philippine Animal Welfare Society (PAWS) earlier hit the illegal killing of the dog, citing the Animal Welfare Act or Republic Act No. 8485 as amended by RA 10631. PAWS executive director Anna Cabrera said the group would file charges against the filmmakers.

The People for the Ethical Treatment of Animals (Peta) followed suit in condemning the dog slaughter and called on the MMFF to revoke the film’s awards and stop its screening.

In a statement, Peta-Asia said whistleblowers confirmed that the dog slaughter scene was real.

“Whether or not the dog slaughter scene was intentionally staged or a dog was coincidentally slaughtered at the location of the movie, the fact remains that the killing was illegal,” Peta-Asia said.

“Instead of watching a dog die slowly and after being beaten to death in front of their cameras, this crime could and should have been prevented,” it said.

Yapan, however, denied any involvement of actors or people behind “Oro” in the killing of the dog.

“(Contrary to what is circulating on social media), I did not order an actor to kill a dog. I was so mad at that accusation. I am not dumb,” Yapan said in a statement. “No actor would condone that. I would not out any actor in that position.”

Yapan claimed he “did not create the metaphor of a dog being slaughtered just to be a hot topic.” He said the dog slaughtering scene was based on an affidavit of a witness of the massacre.

The director also denied that the dog was eaten on the set.

MMFF spokesperson Noel Ferrer said theater owners had been advised to stop screening “Oro” until the filmmakers shall have submitted an edited version cutting out the dog slaughter.

The National Association of Cinemas of the Philippines, meanwhile, has agreed to extend the screening of MMFF entries until Jan. 7.

At the awards presentation on Dec. 29, “Sunday Beauty Queen,” the only documentary to be included in the MMFF’s 42-year history, won best picture.

Quezon City Rep. Winston Castelo, chair of the House Metro Manila development committee, has said that the revamped MMFF showed that indie filmmaking could succeed with enough government support. —WITH A REPORT FROM DEXTER CABALZA