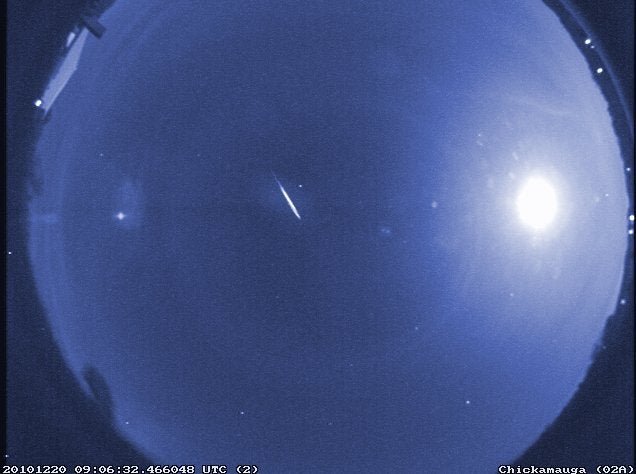 This 2010 file photo shows a Quadrantid captured by a NASA meteor camera in 2010. FROM NASA.GOV

MANILA — The New Year fireworks may be over, but a natural lights show can be viewed in the night sky this week.

The annual Quadrantids meteor shower, active in the first week of January or from January 1 to 7, may even be more visible this year given only a dim light from the waning moon.

“On average, the Quadrantids shower 30 meteors per hour, but this year, there’s a prediction the shower can reach up to 100 to 120 meteors per hour, although that’s on a perfect night—no clouds, no moon, no city lights,” said weather observer Nico Mendoza of the Philippine Atmospheric Geophysical and Astonomical Services Administration (PAGASA) observatory, in an interview with the Philippine Daily Inquirer on Monday.

According to the PAGASA astronomical diary for January, the Quadrantid’s peak activity this year is in the early morning hours of January 4 when meteors or “falling stars” can be seen at a rate of at least 40 per hour.

But Mendoza said the meteor shower would be most visible from January 3 to January 4, from midnight until dawn in the Philippines. Stargazers should look at the northern or northeast side of the sky, Mendoza said.

The Quadrantid meteor shower, taking its name from extinct constellation Quadrans Muralis, appears to radiate between the area of Ursa Major (Big Bear) and the Bootes (Herdsman) constellations, according to Mendoza.

The meteor shower is a result of the stream of debris left behind by the comet 96P/Machholz and the minor planet 2003 EH1, Pagasa said. The Quadrantid meteor shower hits the Earth’s atmosphere at the rate of about 40 kilometers per second.

The meteor shower is visible only in countries in the northern hemisphere, which includes the Philippines.