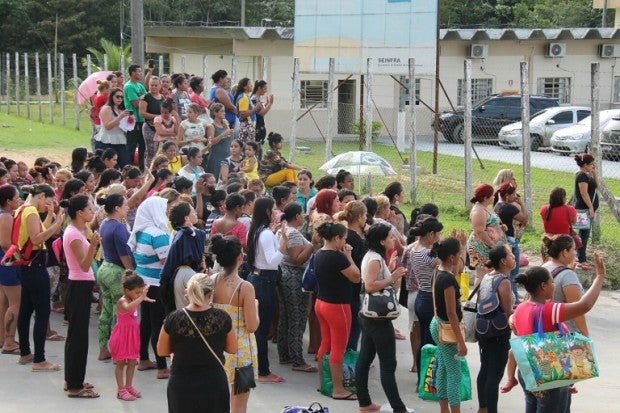 Relatives of inmates ask for information at the main gate of the Anisio Jobim Penitentiary Complex after a riot left at least 60 people killed and several injured, in Manaus, Amazonia state, Brazil on January 2, 2017. AFP

MANAUS, Brazil — Rioting inmates in Brazil decapitated and brutally assaulted their rivals, killing at least 60, when fighting erupted between two gangs at a prison in the Amazon region, officials said Monday.

The 17-hour riot broke out Sunday afternoon and lasted through the night at a prison on the outskirts of Manaus, the capital of Amazonas state, said state public security secretary Sergio Fontes.

He called it “the biggest massacre” ever committed at a prison in the state — and it ranks among the most deadly of numerous prison riots across Latin America in the past decade.

“Many (victims) were decapitated, and they all suffered a lot of violence,” [Sergio] Fontes told a press conference.

Bloodied and burned bodies were stacked in a concrete prison yard and piled in carts, said an AFP photographer at the scene.

Outside, heavily armed police hunted for dozens of inmates who escaped through a series of tunnels discovered at the Anisio Jobim penitentiary complex.

Forty have been recaptured so far, the state security secretariat told AFP.

“We think they had already done what they wanted: kill members of the rival organization.”

Anguished relatives of inmates meanwhile waited outside the prison for news of their family members. Authorities have not yet released the names of those killed.

Police finally restored order at the prison on Monday morning, freeing 12 guards who had been taken hostage, Fontes said.

They found a horrific scene inside.

“Many (victims) were decapitated, and they all suffered a lot of violence,” Fontes told a press conference.

He said the gruesome scene appeared aimed at sending a message from the Family of the North (FDN), a powerful local gang, to rivals from the First Capital Command (PCC), one of Brazil’s largest gangs, whose base is in Sao Paulo, some 2,700 kilometers (1,650 miles) to the southeast.

“During the negotiations (to end the riot), the prisoners had almost no demands,” Fontes told local radio network Tiradentes.

“We think they had already done what they wanted: kill members of the rival organization.”

It was the latest eruption of horrific violence to hit Brazil’s underfunded and overcrowded prisons.

In October, deadly riots broke out at three prisons blamed on fighting between members of the country’s two largest gangs, the PCC and the Red Command (CV).

During that episode, rioting inmates took visitors hostage, beheaded rivals and burned others alive, killing 33 people in all, authorities said.

Brazil’s prisons are often under the de facto control of drug gangs, whose turf wars on the outside are also fought out among inmates.

“There is a silent war of drug trafficking, and the state needs to intervene,” Fontes said.

“There is a silent war of drug trafficking, and the state needs to intervene,” Fontes said.

“What did we see in this case? One faction fighting another, because each wants more money. The fight is for money and space.”

Brazil has struggled for years against a lucrative and violent drug trade.

But jailing drug traffickers has done little to solve the problem. It may even fuel it, critics say.

Human rights groups have long complained about the conditions in Brazilian prisons.

“When you put inmates from rival factions in the same prison unit, the state has no control over what happens inside,” he told AFP.

“When you put inmates from rival factions in the same prison unit, the state has no control over what happens inside,” he told AFP.

Some 622,000 people were imprisoned in Brazil as of the end of 2014, most of them black males, according to a justice ministry report.

That makes it the world’s fourth-largest prison population, the report said, after the United States, China and Russia.