She was 16 when she married Remegio, a fisherman’s son from Los Baños town in Laguna province. They did not have much for a honeymoon trip, so after the wedding, Remegio took her for a boat ride around Talim Island in the lake.

The view was an expanse of sky and water, “so clear you could actually see right through it,” Bariring said.

It was 1958 and fish abounded in the lake, they did not worry where to get their meals. 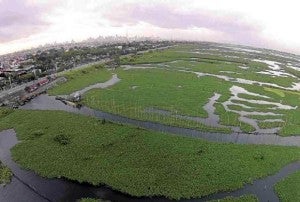 With 17 villages in the towns of Binangonan and Cardona in Rizal province, it truly is a “speck” in the middle of the 90,000-hectare (900-square-kilometer) lake.

With 25 percent of the country’s population dependent on the lake, this region generates almost 60 percent of the Philippines’ gross domestic product.

On July 25, 2016, President Duterte, in his first State of the Nation Address, cited the lake as part of his administration’s environment programs. He aims to transform the lake into a “vibrant economic zone showcasing ecotourism.”

Mr. Duterte said in his speech that every time he flew to Davao City, he saw from his plane window fishing structures splicing the lake into smaller rectangles.

He blamed privately owned fish pens for the reduced catch of the fishermen.

“The plane passes over that lake every time I go to Davao. I can see that there is no more space for small fishermen and they are complaining about their loss. Their fishing areas have been limited,” he said.

He said his administration would deal with the “negative impact of watershed destruction, land conversion and pollution” in the lake.

“This is what I am telling you. The poor fishermen will have priority in its entitlements,” he said.

Section 51 of the Fisheries Code of the Philippines (Republic Act No. 8550) states that “not over 10 percent of the suitable water surface area of all lakes and rivers shall be allotted for aquaculture purposes like fish pens, fish cages and fish traps.”

RA 8550 also says that the “stocking density and feeding requirement shall be controlled and determined by the [lake’s] carrying capacity.”

The lake’s carrying capacity therefore allows up to only 9,000 hectares for aquaculture. But over the years, the area covered by fish pens and fish cages had grown to 12,315.80 hectares (as of June 30, 2016).

“It (Laguna de Bay) really is choked,” said Acosta, who was appointed head of the LLDA by then President Benigno Aquino III.

Acosta, who served as presidential adviser for environment protection and served in the Aquino Cabinet for five years, continues to hold his position in the LLDA on a holdover capacity.

He likened the fishing structures to body fat, saying too much of it makes it harmful to one’s health.

“So you take some of that out. Bring it back to [the] carrying capacity and then allow for hydrology (natural flow of water) to be more balanced [thus] giving the lake a chance to rehabilitate,” he said.

The government, through the LLDA, piloted commercial fish growing by putting up a 38-hectare pen in Cardona, Rizal, in 1970.

“Laguna de Bay is unique. It’s a living lake that produces its own abundant [supply of] algae,” said Mel Felix, head of the Association of Laguna Lake Fish Producers (ALLFP).

Phytoplankton serves as natural food for fingerlings, hence operators rarely use commercial feed that contribute to the lake’s pollution.

The lake also has the capacity to naturally “cleanse” its water by the entry of saltwater, through the Pasig River, once a year.

“You source fingerlings from Bulacan and put them in a pen,” Felix said. With less input, as opposed to fishponds in Pangasinan and Pampanga provinces, the price of fish from the lake (P30 to P40 a kilogram for “bangus”) stays half the price of those from other areas.

The ALLFP has more than a hundred members, most of them wealthy investors or corporations.

During the early years, retired military officers operated structures in the lake. In the 1980s, Taiwanese businessmen came in, followed by Korean traders.

Foreign investors did not last long, because many lost millions of pesos to typhoons in the 1990s or had been cheated by Filipino caretakers.

In an effort to regulate the growing fish pen industry, the LLDA, in 1983, drew up a zoning map. But it took the agency 12 years to fully enforce it due to strong opposition from fish pen operators.

The Fishery Zoning and Management Plan (also called Zomap) is like a subdivision plan, identifying fishing zones and navigational lanes.

The government is using the 2003 Zomap, known as the “Arroyo belt” or the “Cataquiz belt,” as it was revised during the administration of then President Gloria Macapagal-Arroyo, with Calixto Cataquiz as LLDA general manager. It restricts fish pens within a 10,000-hectare area and smaller fish cages in a 5,000-hectare area.

Over the past 10 years, the LLDA has stopped issuing permits to new investors, prompting other operators to build structures outside the map that eat up navigational lanes.

These “illegal” operators usually have connections to mayors of lakeshore towns or to LLDA field agents, Felix said.

Sixty percent of the total fee collection goes to the LLDA while the rest is divided among lakeshore towns.

The smallest fish pen occupies a little over 4 hectares and the largest about 50 hectares. An individual is allowed only up to 5 hectares, a cooperative up to 25 hectares, and a corporation up to 50 hectares.