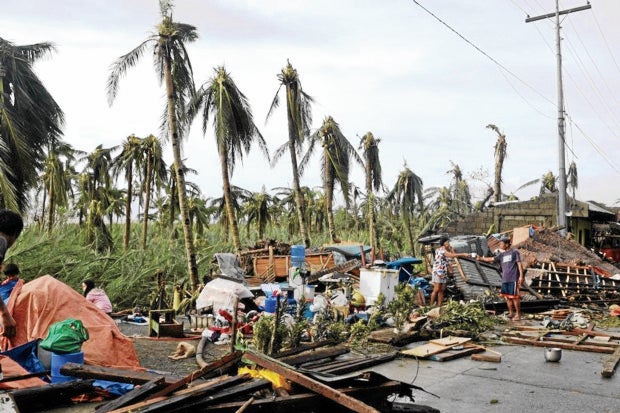 SCENE OF DESTRUCTION:  In this Dec. 28 file photo, a woman shares a cup of hot coffee with her husband amid the ruins of their house a day after Typhoon “Nina” struck their village in Bato, Catanduanes province. Authorities reported at least seven deaths in the strongest typhoon to hit Bicol in 10 years. —FERNAN G. GIANAN

MANILA — In response to appeals for more help from victims of Typhoon Nina (international name: Nock-Ten), the humanitarian organization Philippine Red Cross has sent a caravan loaded with emergency relief supplies to the provinces of Catanduanes, Marinduque and Albay.

The humanitarian caravan, deployed by PRC last Dec 30, reached the three provinces before the New Year.

The Red Cross chairman, Senator Richard Gordon, will also be in Tiwi, Albay and Bato and Virac, Catanduanes, via helicopter on Tuesday to oversee the operations.

Based on reports from the PRC’s Operation Operations Center, Typhoon Nina displaced 125,696 families or 583,574 individuals, and damaged around 153,316 houses.

In a statement, Gordon said they deployed the caravan last Dec 30 as they remembered to honor the heroism of Dr. Jose Rizal.

Since Typhoon Nina struck, Gordon said PRC staff and volunteers have been on the ground closely coordinating with local governments, distributing relief items, while other workers assisted in the distribution of emergency relief items and the preparation

Earlier, several Marinduquenos, including Manila-based filmmaker Joseph Israel Laban,  have appealed in social media for help and assistance using the hashtag #BangonMarinduque as some of the people from far provinces  have not been reached yet or were given enough assistance, and are having problems with electricity.

“There are still areas which have not yet received help like the islands of Maniwaya and Mongpong. People are going hungry for five days,” Laban said, adding that their province would need a long-term rehabilitation program, more food supplies, and help to rehabilitate schools destroyed by Typhoon Nina.

Robert Palustre, also from Marinduque, told the Philippine Daily Inquirer his disappointment on the attention being given to their province.

“Ano po ang magagawa ng noodles at sardinas? What we really need is to call the attention of the government for funds and livelihood programs. Crops were destroyed. As of now, there are relief goods but it will not sustain the real needs of the families. We need to build houses and start planting for the next harvest,” he said.

Gordon, in a previous statement, also appealed donors for help for the victims of the typhoon. The donations, he said, would cover the cost of the relief operations and provision of food items such as hot meals and ready-to-eat meals, and non-food items such as blankets, plastic mats, mosquito nets, hygiene kits, jerry cans and tarpaulins.

In an interview, he said they “will look for the most vulnerable people. We will augment what the government will provide.”

“The world might have overlooked Typhoon Nina because it happened during the Christmas season, people are preoccupied. But people need to take a second look and help, they live in outlying areas, islands,” Gordon said noting the low turn of donations for the victims.

“The DSWD can provide food;  we will also provide non-food items, water tankers, and gifts such as  1,000 pairs of shoes per province,” Gordon added.

The PRC has  also provided psycho-social support and has helped restore family links services, health and hygiene programs to affected families, and establish water stations though donated water bladders and tankers in communities and evacuation centers to provide access to clean water.

For those interested to help, donations may be sent to the PRC Tower, 37 EDSA corner Boni Avenue, Mandaluyong City, or in any of the PRC chapters nationwide.