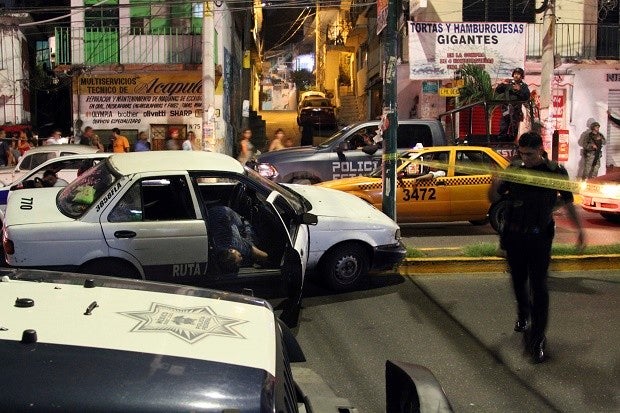 A taxi driver lies dead in his car after being shot shortly before midnight in a busy street in Acapulco early Sunday, Jan. 1, 2017. At least five people were killed over the New Year’s weekend in the Mexican resort city of Acapulco, including three men found decapitated in a central neighborhood. AP

ACAPULCO, Mexico — At least five people were killed over the New Year’s weekend in the resort city of Acapulco, including three men found decapitated in a central neighborhood, officials said Sunday.

The three severed heads were found Saturday on a residential street on the roof of a car, with the bodies inside. The killings were confirmed by a law enforcement official who was not authorized to discuss the matter publicly and spoke on condition of anonymity.

Later the same day, unknown gunmen opened fire at police who were assisting at the scene of a traffic accident in a tourist quarter near the beach, killing one officer. City government spokesman Jose Luis Mendez said it was not clear why the officers were attacked.

Early Sunday, a taxi driver was gunned down in his cab on a road that leads out of the city.

At least 35 people have been killed along Acapulco’s touristy beach areas this year, something that rarely happened in the past, as drug gang violence plagues the city and the surrounding state of Guerrero.

Also Sunday, another police officer was shot dead in Atoyac de Alvarez, about 55 miles (90 kilometers) northwest of Acapulco. Municipal police reported the officer was riding a scooter when an unknown attacker approached and shot him several times in the chest.